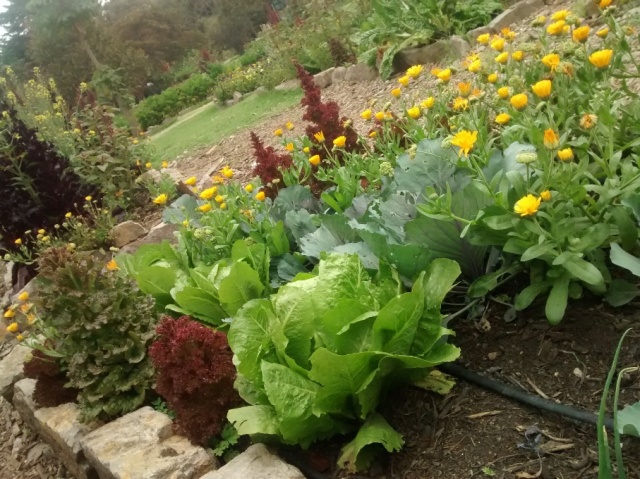 For as long as I can remember, daddy always wanted a vegetable garden, a place to grow his own produce. There were a few attempts with this in mind, but the weeds were very determined and his efforts never yielded much more than a few tomatoes. Eventually, life and work took over, and attempts were given up.

I was grown and married by the time mom and dad bought a house on the edge of town with a large empty lot out behind the garage. At last daddy had a place to grow his garden. He studied the seed catalogs that came in the mail and pondered about what he would plant.

Daddy had an old rusty tiller that someone gave him. He piddled with the motor to keep it running. In the spring daddy would plow the earth and get it ready for planting. The garden he planted was far too large for his needs, but he was not actually growing it for the food. He was growing it because he loved to work outside, to smell the fresh earth, and to see the seeds grow into plants and mature.

The garden was a place where you could nearly always find daddy on the weekends or when he was not at work. When I would visit, he would show the grandchildren his garden and the things that were growing. If there were any ripe tomatoes, he might even let the kids pick a few.

Daddy liked to grow a variety of things. That way if one vegetable failed or was eaten by the garden pests, he had other things to tend. In early spring he planted lettuce and green onions; later he would plant tomatoes and pepper plants, potatoes, beets, turnip greens, and green beans. He grew cucumbers for pickles, and squash and okra that mother would roll in cornmeal and fry in her iron skillet. Daddy didn’t grow corn because it took too much room and because the crows always ate it anyhow.

During the summer, you could never visit without dad telling mom, “Hon, give her some of those tomatoes to take home.” Daddy always grew far more than they could possibly eat, even though mother would freeze green beans, and anything else that could be frozen, and put it in the big freezer in the utility room. If it couldn’t be frozen, it could probably be pickled or canned in a mason jar.

Surplus produce was given to neighbors, friends, relatives, acquaintances, strangers or anyone else that wanted it. Later, the garden’s bounty was taken to the senior citizen center where seniors waited like vultures to see what dad would bring next. It pleased him to be able to give away the fruits of his labor.

When the rabbits came to sample the garden, daddy built an old wooden fence out of scrap lumber to keep them out. The rabbits probably rolled over laughing at it and hopped through a crack, but there was enough for the rabbits and everyone else he knew anyhow.

It must have been a lot of work to tend a garden so large, but daddy did it year after year until he became too old to work in the garden any more. The garden became smaller each year and finally was given up entirely. The last time I saw the garden, grass grew over the spot and there was no sign that a garden had ever been there. Funny, how the patch of land looked so much smaller than it did when daddy had a garden there.

Now daddy’s garden is only a memory and has returned to the earth that it came from. I can still see it in my mind just as it was when it was alive and thriving. And, as long as anyone remembers it, the garden will never die.

My stories are about daily life and the funny things that happen to all of us. My columns have been published in numerous newspapers, magazines, anthologies, and websites.
View all posts by Sheila Moss →
This entry was posted in Crafts/Hobbies, Holidays, Humor, Plants/Gardening and tagged Dads, Family, Father's Day, Fathers, Garden, In Honor, In Memory, Land, Plants, produce, Vegetables. Bookmark the permalink.