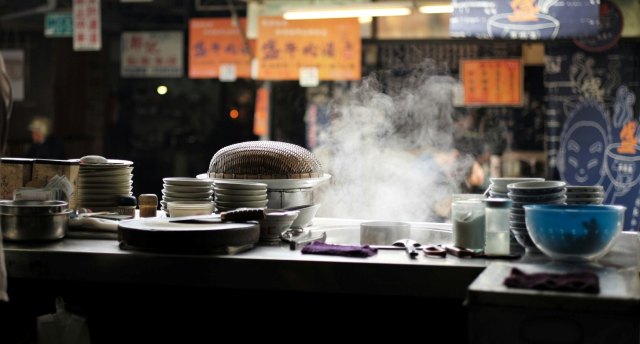 My daughter took over the kitchen at my house. I don’t know why — unless she was tired of eating frozen dinners. Actually, I was getting a bit tired of them myself, so I didn’t object too much, though I was secretly a bit worried about what sort of dinners she might cook.

Day one: Beef stew and biscuit. Right, I thought, it probably will taste like dog food and kibble. Amazingly, it was pretty good. We lapped it down without asking many questions and waited for the second day.

Day two: Turkey and dressing. Turkey and it isn’t even Thanksgiving? She must have spent all day doing this. Well, I have to work and don’t have time for roasting turkeys and tossing bread cubes. We ate it up and praised her cooking skills.

Day three: Chicken and dumplings. Ugh! I remember how my mother made dumplings, all soggy and gooey. That’s why I never bother with them. But these dumplings were light, fluffy and delicious. This kid can cook I decided, wondering where she got the recipe. Not from her grandma, that’s for sure.

Day four: Southwest chili and cornbread. This can’t possibly be good, I figured. How would she know how to make chili? That’s a specialty item. Where is she getting all the groceries, anyhow? I was starting to suspect that she was harboring a chef, hiding him in the attic and bringing him out only during the day while I was working.

Day five: Chicken Casserole. Tender cubes of chicken, lightly floating in a creamy sauce with a medley of vegetables and a crumb topping. This can’t go on. If I didn’t recognize my own casserole dish, I would swear that she was sneaking in food from a restaurant. But as long as I’m not buying, I might as well eat and enjoy.

Day six: Okay, today is the day I find out what’s going on around here. I’m green with envy at the culinary delights that have been parading through my kitchen. But she made spaghetti today. Pretty much anyone can cook spaghetti with a simple meat sauce. Yes, it was good, but what’s going on during the days when I’m not at home?

Day seven: Sneaked into the kitchen at night with a flashlight. Opened the cabinet and discovered the secret at last. A row of red boxes cleverly called complete classic dinners. So that’s the secret! Cans of vegetables, sauces, envelopes of breadcrumbs and spices all packaged up in the same box. They even include the meat! No slaving over the hot stove. No worrying about putting elusive ingredients together. It’s all packaged and ready to cook.

Well, that’s cheating! She didn’t do any work at all!

So, am I going to let her know that I’ve been nosey and found out the secret to the delectable exhibition of cuisine? Heck, no! She might stop cooking. I sure don’t want to go back to those tasteless frozen dinners or the long, tiring process of cooking a meal after a hard day’s work. Some things are best left alone. Besides, one of those boxes said, “Chicken Pot Pie”. That’s my favorite.

So, I set the table, offer to do the dishes, give her a gift certificate for groceries, buy her a new set of pots and throw in money for a new apron while she’s out shopping anyhow. Then I retire to my computer while mysterious clinking sounds come from the direction of the kitchen and delicious odors float down the hall.

What do I care where the food is coming from? The main thing is I don’t have to cook it!

My stories are about daily life and the funny things that happen to all of us. My columns have been published in numerous newspapers, magazines, anthologies, and websites.
View all posts by Sheila Moss →
This entry was posted in Family, Food, Humor and tagged cooking, Cuisine, Culinary, Dinner, Easy meals, Ingrdients, Packaged meals, recipes. Bookmark the permalink.