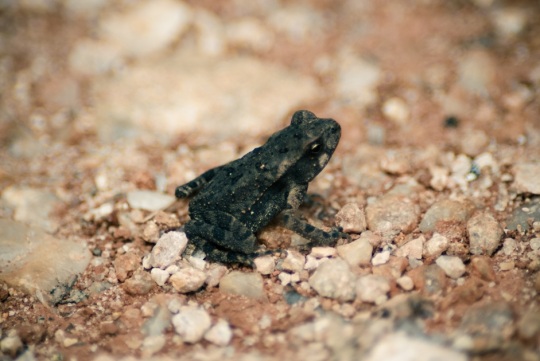 My grandson stood in the open garage door looking out at the summer rain that had spoiled his plans to stretch the day by playing outside in the dark and maybe even chasing fireflies.

Just as he was about to go inside, he saw it – a jumping rock. Then he realized it was not a rock at all, but something better – a FROG – the stuff a young boy’s dreams are made of. It’s raining frogs, he thought; maybe it really does rain frogs!

He ran inside wide-eyed to tell the news, “I saw a frog!”

And sure enough the frog was still there hunched down on the wet driveway in the rain. “Can we catch it?” he asked. How could anyone refuse the request of a wide-eyed boy who wanted to chase a frog?

The frog sensed trouble and went hopping down the driveway with my grandson hopping behind him squealing with delight, and my daughter skipping puddles in the rain. After several attempts, the elusive frog was captured.

The child held it in his small hands feeling the life in the creature.

The frog was placed in a bucket that was too deep for the creature to jump out and taken inside to the light of the kitchen to admire. My grandson looked at its bulging frog eyes, its webbed feet, and touched its amphibian skin with wonder. It was a fine frog.

A boy’s first frog is a big event in life. Grandma brought the camera out to record the occasion as the boy beamed with excitement and posed with the captured wild life.

“You can keep it for a little while, but then you have to turn it loose so it can go home.”

Grasping for a reason that a five-year-old could comprehend without being told the gruesome details of a wild creature’s slow death in captivity, my daughter replied, “Its mother will be worried.”

My grandson looked thoughtful, then suggested, “Maybe we could catch the mother too?”

“Wild creatures need to be free, even frogs,” explained his mother. “Wild things cannot live unless they are free.”

Finally, he understood and nodded. “Well, I’ll just keep it for a little while,” he said, still not ready to give up ownership of such a fascinating, bug-eyed creature.

Too soon it was time to return the frog to its environment. The bucket was taken outside and turned on its side, and the creature hopped away and disappeared into the flowerbed.

My grandson tried to find it among the daylilies the next morning, but the frog was gone back to wherever frogs go to hide when there is no torrential rain in which to play.

My grandson is still young. There will be more rain in his life and other frogs that will come out on dark nights from secret places.

But this frog will always be special – there will never be another frog
exactly like this one.

It was a boy’s first frog.

My stories are about daily life and the funny things that happen to all of us. My columns have been published in numerous newspapers, magazines, anthologies, and websites.
View all posts by Sheila Moss →
This entry was posted in Creatures, Humor and tagged amphibians, Creatures, frog, Pets, wildlife. Bookmark the permalink.

1 Response to A Boy’s First Frog