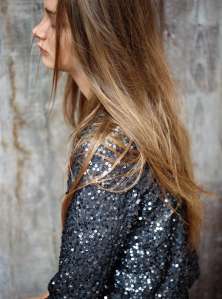 Oh, that’s pretty,” I thought. In Smyrna, Tennessee, anything blue that isn’t denim is pretty. I checked the price tag. $7? It must be a mistake. But that’s what the tag said. The price marked is the price, isn’t it?

“What would I do with a blue sequin jacket?” I thought. I could not very well wear it on Saturday to Walmart, and it would cause too much gossip at the First Baptist Church. They would think I had been out all night partying. So, I passed it by and didn’t try it on.

Why is it that the thing we didn’t buy is the thing that haunts us later? I had visions of me in the sequin jacket going to the Swan Ball — or at least the Swine Ball. I imagined going on a dinner cruise on the General Jackson Showboat, or to a fund-raising charity dinner dance, or to a New Year’s Eve party at the Opryland Hotel. It would also be perfect for Tunica – the redneck Vegas near Memphis.

Unfortunately, I never go to any of those places, and if I ever was invited to go through some sort of clerical error, I could dust off some of the formal stuff I already own from the olden days when I was involved in politics.

The blue sequin jacket taunted my dreams. I fanaticized about the jacket and how great I would look in it, like Reba McEntire or Princess Di. I could wear it with a little navy skirt and glitter in style at the theater. We do have theater in Nashville, despite what people think.

I was becoming obsessed.

I mentioned the fancy duds to my honey. “Why didn’t you get it?” he asked.

“You could get it and you would have it if you ever did need it.”

Somehow his logic made sense. I should have bought it, especially for the price. Maybe I could go back and get it. But that never works with thrift shops. If you see something you like, better buy it right then as it will not be there when you go back.

I could run by there after work and check. But it’s been three whole days. It would certainly be gone. Maybe I could call and ask them to hold it for me? No, no, a thrift store will not do that. Besides, what if I get there, try it on, and it doesn’t fit?

If I don’t get it, it doesn’t really matter. I have nowhere to wear it anyhow.

Wait a minute! What am I thinking? This is Nashville. We practically invented sequins. If the country music stars can do it, so can I. I can wear it with jeans and go to the Opry. Watch out Porter Wagoner! That’s me in the first balcony with the flashy blue sequins and cowboys boots.

Well, I went by the store after work. I stood staring at the empty space where the jacket was hanging before. I looked through all the other jackets. It was gone, gone, gone, just as figured it would be. As many big-haired ladies as we have in Smyrna, one of them is probably wearing it down at the Assembly of God church right now.

Would whoever bought my blue sequin jacket, please return it? I have a lot of places that I’m dreaming of going, and you probably didn’t need it anyway. You probably just bought it so you would have it in case you ever needed it.

My stories are about daily life and the funny things that happen to all of us. My columns have been published in numerous newspapers, magazines, anthologies, and websites.
View all posts by Sheila Moss →
This entry was posted in Fashion, Humor, Shopping and tagged bargains, clothing, fancy clothes, formal wear, opry, sequins, thrift stores. Bookmark the permalink.

1 Response to The Blue Sequin Jacket