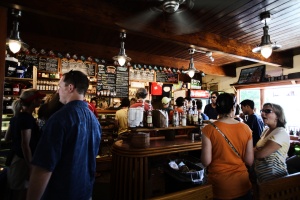 Since Starbucks has been in the news lately, I decided to give them another try and do a bit of field research for a column. I’m not a gourmet coffee person. My idea of gourmet coffee is buying a cup at Mapco when I stop for gas.

I really don’t understand the Starbucks craze. I know, they have a lounge chair or two and try to make their chain restaurants have a coffee-house hangout look. But, I’m always amazed at the long line of cars at the drive-thru. Is it really that good, or are people just too lazy to put water in a coffee pot?

I confess I did go there once to buy a gift card for my older daughter and her hubby. They are among the coffee elite. But, something about a coffee-house menu intimidates me. Why can’t they make the menu in English? Is not being able to understand the menu part of the appeal?

I decided that I would do research so I would not be a complete coffee idiot. I started with Espresso. It sounds like express. Instant coffee? Hardly, at least not in the powdered form. Espresso, I found out, is very strong coffee. It is brewed quickly under pressure. I thought of my old pressure cooker that could cook a whole chicken in 20 minutes flat.

Espresso seems to be the base of most of their stuff. Nobody could drink espresso and like it unless they are a liar, so it is diluted in various ways. Latte is coffee and milk – we non-elites would call it half and half. I don’t know why they have to call it latte.

There is also something called Americano. It’s coffee diluted with hot water to make it like regular coffee. Why bother? Cappuccino is another foreign word ending with “o”. I don’t know what it means, but it is part espresso, part milk-o and part foam-o. Foam-o is not whipped cream-o, by the way, or at least not whipped cream that has been sweetened.

Then there are added flavors, vanilla and mocha being the main ones. You’ve probably heard of vanilla ice cream. Mocha is chocolate. Yes, chocolate coffee. I would call it another word.

I thought I was ready now.

We went to Starbucks. The menu covered an entire wall and made no sense, just as I remembered.

“Can I help you?” The barista asked. Barista is a fancy word for coffee bar server.

“Er… your menu is rather complicated,” I stuttered.

“Take your time,” she replied. I thought maybe she would offer to interpret, but apparently you are on your own unless you bring a menu translator.

My daughter, whom I brought along for moral support, said, “I’ll have a tall vanilla latte with whip.”

“What’s frappuccino?” I asked, starring at the wall.

Cold coffee? I decided to skip that category.

Other people spouted out orders in a foreign tongue as if they had been speaking Starbucks forever. I had not the faintest idea what they were ordering.

Finally, I decided to try a tall cappuccino. Bad choice, as I like sweet coffee, but I didn’t know. My daughter got me some Sweet and Low. I stirred it in the foamy stuff the best I could, but it didn’t help much. I drank it anyway. After paying almost four dollars for a small coffee, I was going to drink it if it killed me.

The caffeine hit my veins with a jolt! My eyes may never close again. Wow! That’s some powerful stuff. I won’t sleep for a month! Maybe never!

The next time I go, I think I will get the latte.

Next time? Did I actually say next time? No wonder the drive-thru line is so long.

My stories are about daily life and the funny things that happen to all of us. My columns have been published in numerous newspapers, magazines, anthologies, and websites.
View all posts by Sheila Moss →
This entry was posted in Food, Humor and tagged caffine, cappuccino, coffee, coffee-house, expresso, gourmet, latte. Bookmark the permalink.

6 Responses to Speaking of Starbucks