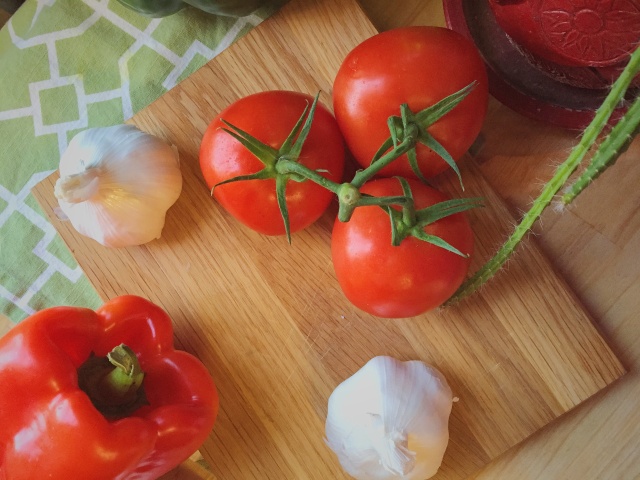 We had garlic for dinner last night. My daughter has taken over the kitchen and is perfecting her culinary skills by cooking the evening meal. Ordinarily this is fine with me. I’m tired after working all day and coming home to a good hot meal is a welcome treat.

The problem is that she likes to use a pinch of garlic for seasoning. She has become a bit heavy-handed with it in the past – to the point that it became a family joke. The minute we walked in the door, the garlic scent would hit us.

“I see we are having spaghetti and garlic sauce for dinner.”

She learned to lighten up a bit with the seasoning and all was well – that is until tonight. It seems that she was going to sneak in her usual pinch of garlic that no one would even notice. But, as she sprinkled the garlic power out of it’s shaker, the lid fell off and, well, you can imagine the rest.

Did she throw out the entire dinner and say, “Let’s order a pizza tonight.”? Of course not! She did what any cook would do. She tried to remove as much of it as she could, stirred the rest into the sauce and said nothing.

Of course, garlic is one mistake that is difficult to conceal. Even if we could not smell it, we could see the waves of fumes floating down the hall from the kitchen. Luckily, we do not own a canary or it certainly would be dead.

“I see we are having garlic sauce again tonight?”

Not wanting to offend the cook, since she might quit cooking if we criticize her too much, we proceeded to attempt to eat it anyway. Actually, it didn’t taste nearly as bad as it smelled and hardly peeled the wallpaper off at all except near the stove. I think when we have the carpets cleaned, wash the curtains and air out the house for a month or two, you will hardly notice the garlic scent at all.

Julia Childs says you should never ever use garlic power, only the real thing. Unfortunately, Julia Childs wasn’t doing the cooking. I can only wonder if she adopted this policy due to the taste of fresh garlic or due to a garlic disaster such as ours.

Now this is the part of the story where I get in trouble. All the garlic lovers are going to write to proclaim the virtues of garlic. “It kills bacteria, is good for colds, fights cancer, improves male impotence, and cures sinus problems.” Garlic activists will fill my comments area with hate mail, and write snide comments in their “cooking with garlic” blogs.

Okay, okay, I don’t know whether it does all these things or not, and I certainly don’t want to get close enough to the garlic enthusiasts to argue about it. We will just presume for the sake of my sanity that they are correct.

Actually, though, I don’t know if I want my sinus problems fixed, at least not for a week or two until my eyes stop watering. As for other cures, I’m just wondering what good it would do a man if the aphrodisiac he uses is garlic? Even my sinuses are not that bad!

I know what they are going to say already. The scent of the garlic can be removed leaving only the medicinal properties. Somehow, I can’t quite comprehend it. I have a feeling that when the scent is removed a whole barrel of garlic scent remains and only a tiny speck of unscented garlic is removed with tweezers.

Besides, what good would it do? Julia Childs would most certainly never touch unscented garlic!

My stories are about daily life and the funny things that happen to all of us. My columns have been published in numerous newspapers, magazines, anthologies, and websites.
View all posts by Sheila Moss →
This entry was posted in Family, Food, Humor and tagged cooking, culinary skills, garlic, garlic for health, garlic powder, spaghetti, unsented garlic. Bookmark the permalink.

10 Responses to Cooking with Garlic