Sleepless in a Sleep Clinic

“I think you have it,” said the doctor.” We just need to see how much.”

What he was referring to is the state-of-the-art illness called sleep apnea. In seems the only way to find out if you have it is to spend a night in a sleep clinic. Now a sleep clinic is not like a hospital. Your room is supposed to look like a motel room so you feel at ease and are able to sleep normally while they “monitor” you.

My room didn’t look a whole lot like any motel room I’ve ever been in, but why argue? Obviously, they are not going to redecorate just for me. I sat down on the sofa that was so slick I had to brace myself to keep from sliding off. What do they do? Wax the upholstery?

The sleep technician came in to “wire” me. This involved having receptors glued on my scalp and forehead with long wires running out to “monitor my brain waves.” The fumes from the glue he used were so overpowering that I was afraid if he didn’t finish quickly I might not have any brain waves.

“Now you can relax a while,” advised the technician.

I watched the required video about sleep apnea in which fat old men snored while their wives proclaimed the virtues of having them sleep wearing an air mask. The apparatus looked a whole lot like a gas mask to me. How anyone could sleep with that contraption on was beyond me.

“There goes any hope for a romantic relationship that I might have ever had,” I thought.

Eventually, I figured I might as well go on to bed and get it over with. Before my head could hit the pillow, the technician appeared to “finish wiring” me. That’s when I realized that I was on candid camera. I began to understand how a rat in a cage feels.

Wires were taped to my body and legs. “My, God,” I thought, “I hope they are not going to electro-shock me.” As I stared at the camera on the ceiling, the tech informed me about the live microphone over the bed. Wires were running everywhere and all of them were eventually attached to me. 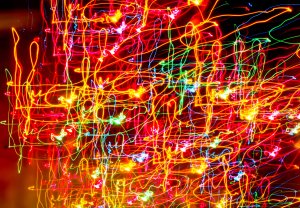 I tossed and turned pulling the wires with me. The oxygen monitor glowed in the dark, so I put my luminous finger under the cover. The harder I tried to go to sleep, the tenser I became. The pillow was too firm and the mattress too soft. The wires were hanging all over me like a string of Christmas tree lights. The room was stuffy and my bladder was calling out to me.

“How can anybody possibly sleep under these conditions?” I wondered. Tossing and turning I was soon wound up in wires like a kitten in a ball of yarn.

Sometime about four o’clock in the morning, I finally dozed off into an uneasy, dream-filled, slumber, while my brain waves scribbled hate messages on the technician’s monitor screen.

At last the night from hell was over. The tape holding the wires in place was ripped away, and I wondered if the ones in my hair would also be jerked away and how I’d like being bald. But some sort of solvent was used to dissolve the glue, leaving my hair in an icky mess.

“You need to shampoo,” said the tech. Fine with me, except there was no shampoo and no hot water in the shower. I finally washed my hair under the faucet in the sink using a bar of soap. It had to dry naturally as I did not think about bringing a hair dryer. I also found I had no toothpaste. After only two hours of sleep all night, however, I really didn’t care at this point.

I have a feeling I flunked my sleep apnea test. I bet I’ll get an A+ in insomnia, however. I don’t know why they call it sleep clinic. As far as I’m concerned, it should be called a “sleepless” clinic.

My stories are about daily life and the funny things that happen to all of us. My columns have been published in numerous newspapers, magazines, anthologies, and websites.
View all posts by Sheila Moss →
This entry was posted in Health, Humor and tagged Apnea, sleep apnea, sleep clinic, Sleep disorders, sleep monitor, sleep study, sleep test, Snoring. Bookmark the permalink.

11 Responses to Sleepless in a Sleep Clinic