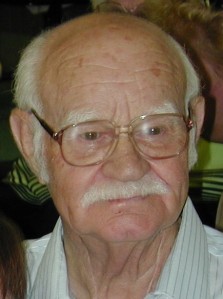 Daddy always had an outside building of some sort.  Some men have sheds or barns, but Daddy’s private place was always a garage.  The garage was a “man place” where he could keep his tools and automotive stuff, a place to call his own away from the women in the family.

Daddy’s garage had tool benches that he made himself at some point in time so long ago that the exact date has faded into oblivion.  He kept all his tools there, hammers, saws, screwdrivers, and gadgets that I don’t even know the name of, much less how to use.  Each one had its place in the structure of his life and only he knew where it belonged.

I didn’t really understand what all these tools were for as I’ve never known of Daddy building anything much.  He just liked to “piddle,” we said. When my sister and I were kids, we would sometimes “borrow” his tools, and we always forgot to put them back where they belonged.  You would think we would have learned to be sneaky so we wouldn’t get caught, but we never did.

The walls of the garage were covered with old license plates, hubcaps, bumper stickers and yard tools.  The shelves were full of ancient dusty objects. There were piles of scrap lumber that Daddy had collected, just in case he ever did decide to build something significant. It was all pretty dreadful to a woman’s prying eyes, which is probably exactly what Daddy had in mind. 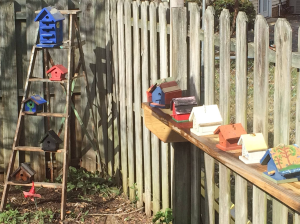 Some of Daddy’s birdhouses

At one time, Daddy decided to build birdhouses.  He did not stop at one or even several. He built them by the dozen and they lined the shelves on the walls of his garage.  He gave them away to family, and to people he knew and liked.

When Daddy had his heart operation, he had us take a birdhouse to the hospital to give to his favorite nurse.  I hope she appreciated it. It meant a lot at the time because we didn’t know if Daddy would ever be able to build his birdhouses again.

Daddy also built benches for a while, and we womenfolk figured out ways to use them.  I still have several of Daddy’s benches. When everyone had a bench, Daddy started making wooden boxes.  My sister added dirt to hers and planted flowers.  I have some in the attic and I’m still trying to think of a way to use them.

Daddy whittled and carved out birds and other assorted wooden objects with only his pocketknife.  This particular interest ended drastically when he cut his hand rather badly and had to go to the emergency room two times in a row.

Daddy’s favorite craft, though, was building houses for Christmas nativity scenes.  He cut sticks and built crèches from them.  He built them year round and gave them away to anyone who wanted one.  Word got around and there was actually a waiting list.

There came a time when Daddy couldn’t make it out to the garage often any more.  He grew older and walked with a walker.  He eventually had to give up driving a car.  He still went out to his garage occasionally, probably just to have time to himself in his own world and to reflect in dusty solitude.

We women could never understand Daddy’s garage, and gave up trying. There are just some things in a man’s world that are off limits and better left alone.

Did your dad have a special place like a garage, basement, workshop or man cave? What did he do there?

My stories are about daily life and the funny things that happen to all of us. My columns have been published in numerous newspapers, magazines, anthologies, and websites.
View all posts by Sheila Moss →
This entry was posted in Family, Humor and tagged Birdhouses, dad, Daddy, father, Father's Day, garage, Honoring Fathers, Man Cave, Wood carving, Wood Crafts. Bookmark the permalink.