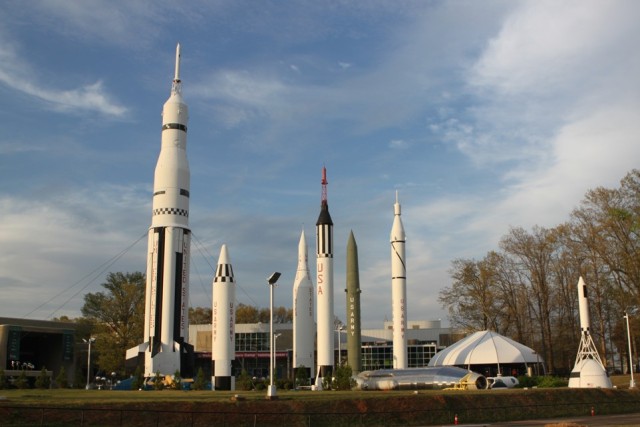 Ever wonder what happens to the leftover space rockets after they return from space? A visit to the U.S. Space and Rocket Center in Huntsville, Alabama, reveals that much of it goes to a museum where the average tourist can visit these wonders of space.

We can walk among “antique” rockets in rocket gardens, gaze into a capsule where astronauts once blasted into the unknown, and marvel at the technology that made it all possible – pretending to understand it.  The remains of these engineering wonders are quite overwhelming in size.  The rockets are so large – and mankind is so small.

The space museum is “front stage” for a complex array of mysterious building and towers that comprise Marshall Space Center and are “off limits” to the casual visitor.  It is “our” space center the guides cheerfully assure us, meaning that the taxpayers have paid for it.  Of course, the focus is on the scientific wonder of it all; the great adventure of the few at the expense of the many, proof of what technology is capable of doing with a single-minded focus and dedication to purpose.

There is talk of the advancement of knowledge, and the innovations that have been made possible as “spin-offs” of technology used in the space program. We listen to the retelling of the stories of how man has conquered the frontier of space, and lived, in most instances, to tell the story.  Indeed, it is all very impressive, including the price tags.

We see an obsolete Blackbird spy plan that once crossed the US in 68 minutes, see the giant Saturn V rocket and all sorts of rockets from space missions of the past, take Disney-like virtual adventure trips, and remember long forgotten names, such as, Mercury, Gemini, and Apollo. The Huntsville Rocket Center is said to be the largest display of space related rockets in the U.S. Many things, such as the lunar rovers made at Huntsville, are said to be reusable, but the vast array, display, and number of obsolete rockets, missiles, and assorted space related memorabilia seems to testify otherwise.

Other than the gift shop, a display of great interest was the model of the International Space Station, which shows how six astronauts can live in a space station in outer space.  The purpose is to advance scientific knowledge and international cooperation by conducting microgravity experiments, such as, growing protein crystals which will give us a cure for cancer, AIDS, and osteoporosis.  Wonderful promises.

Ordinary living is quite difficult in a weightless environment.  Astronauts must be zipped into their beds to prevent them from floating away and being injured.  What a way to sleep. Eating, showering and going to the bathroom are all major undertakings which are explained to a curious audience in more detail than we want to know. Along with this is a diagram of the space station, which resembles something from Star Trek, and much explanation of which country is contributing what part, so that the appropriate country gets the credit (or blame).  By the way, the language of space is going to be “English”.  Hope they told the Martians.

I-565, the highway in front of the Space Center, has been renamed to honor Alan Shepherd, the first man in space, who is now deceased.  Really makes you feel old, huh?  All in all, it makes us a bit homesick for the days when heroes were being made, frontiers being conquered, and no one worried about the cost because it seemed worth any price.  Our hopes were focused outward then and we were optimistic about a wonderful and unlimited future.

Now we have grown up, lost our innocence, and the impossible has become the possible. We can send our kids to Space Camp to interest them in science even though we have grown cynical about whether man’s illnesses will be cured by knowledge from outer space.  In spite of the overdone public relations hype, the rocket center is an interesting place and worth the time to explore, if only to re-visit your tax dollars.

My stories are about daily life and the funny things that happen to all of us. My columns have been published in numerous newspapers, magazines, anthologies, and websites.
View all posts by Sheila Moss →
This entry was posted in Humor, Technology, Travel and tagged Astronauts, Huntsville, Missiles, Rocket Center, Rockets, Science, Space Center, Space museum, Space Station, Weightlessness. Bookmark the permalink.