A Hysterical History of Thanksgiving 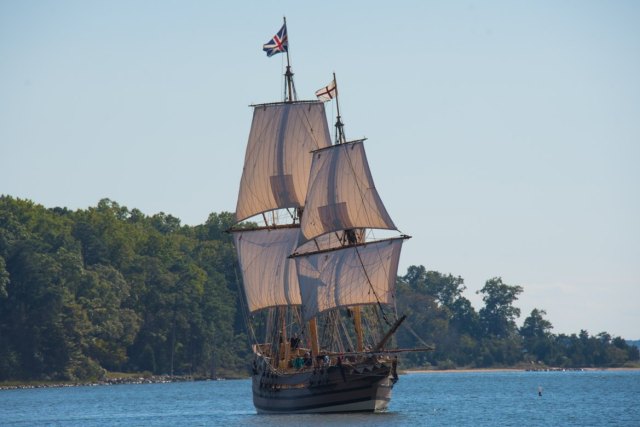 Photo by David Dibert on Unsplash

Once upon a time, there were some Puritans that moved from England to Holland. After a while, the Puritans decided they didn’t much like their kids speaking Dutch because the adults only understood English, and also they really hated going Dutch treat. The wooden shoes gave them blisters, and they preferred black shoes with buckles to match their hats and purses.

They called AAA Travel and booked a cruise for 40 to the New World. Unfortunately the Niña, Piñta and Santa María, had already sailed and all that was left was the Mayflower. The cruise line was lousy and the Puritans didn’t like the bar and casino, so they were pretty grumpy by the time they arrived at their destination.

Although they had sailed all the way across the Atlantic, they were too seasick to go on to Virginia. Probably it was all that seafood they ate. They made a compact with the other passengers to boycott seafood, a revolutionary new idea, which gave them the idea of calling themselves Pilgrims.

When the Pilgrims found Plymouth Rock, they liked its name much better than Cape Cod, which sounded fishy. So, they decided to all get off and settle there. They forgot that Plymouth Rock was pretty chilly in winter, however, and they hadn’t packed any insulated underwear. They didn’t like to ski or drink hot buttered rum either.

Thank goodness, the New World had invented baseball and the Indians were playing that season. The Indians felt sorry for the Puritans, who didn’t understand the game. One of the Indians, named Squanto, knew all the cruse line directors and had traveled to England where he learned to “Speaka the English” with only a slight American accent. Squanto took a special interest in the Pilgrims as the ball team was always looking for rookies to recruit.

Squanto taught the Puritans to hunt so they would be able to find their seats in the stadium when it was built, and to grow pumpkins so they could make jack-o-lanterns for Halloween. Squanto also taught them how to make maple syrup — and taught them to grow corn, and  they could use the syrup for making popcorn balls. If it had not been for this sort of help from the friendly Indians, the Pilgrims would never have made it in the New World

The Pilgrims were so happy they decided to have a big bash to celebrate, and they invited all the Indians to come. Since they didn’t have any hot dogs, they ate roasted fowl and venison and pretended it was ballpark franks. They washed it down with cranberry juice cocktail. Actually, this was only a harvest celebration since the Pilgrims always fasted when they gave thanks.

The next year the Indians didn’t make it to the playoffs and the Pilgrims forgot all about celebrating for several years until another winning team came along. Since they had been praying for a winning team, they were very thankful and decided it might be a good idea to celebrate again.

Unfortunately, the Indians had moved to Cleveland and were beginning to be a little aggravated at the Pilgrims for building houses instead of a new stadium. The Pilgrims decided they would become New England Patriots fans and watch football for their celebration.

They liked the combination of turkey and football so well that they did it every year, and it soon became a tradition. Finally, the Continental Congress passed a law that all 13 colonies would celebrate the holiday, and then they promptly adjourned to go to the big game.

Nobody really took Thanksgiving very seriously until some lady wrote about it in “Ladies Home Journal” and President Lincoln, who frequently took ideas for laws from ladies’ magazines, thought it would be a good idea to have a national day of Thanksgiving.

And that is how the Thanksgiving holiday came about. To this very day, we still over indulge on turkey to celebrate and to show our gratitude for football. We no longer invite the Indians; however, since the World Series is over for the year and they are on vacation and wouldn’t come anyhow.

Written with sincere apologies to the memory of the late, great columnist, Art Buchwald, who satirized the dubious Pilgrims and Thanksgiving story first.

My stories are about daily life and the funny things that happen to all of us. My columns have been published in numerous newspapers, magazines, anthologies, and websites.
View all posts by Sheila Moss →
This entry was posted in Holidays, Humor and tagged Atlantic, Feasting, Indians, Maple Syrup, Mayflower, parody, Pilgrims, Plymouth Rock, Puritans, satire, Thanks, Thanksgiving. Bookmark the permalink.

4 Responses to A Hysterical History of Thanksgiving