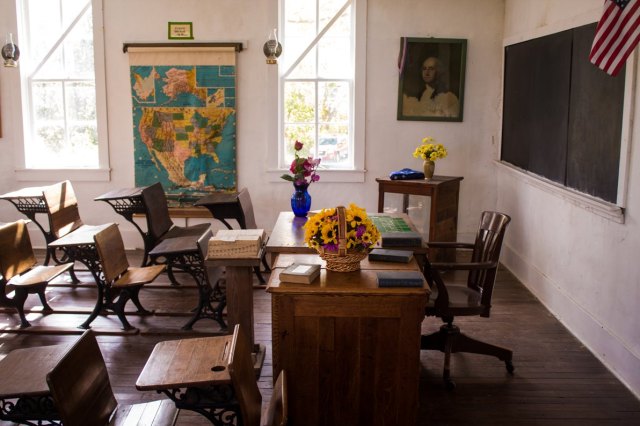 It’s almost September and the kids are going back to school. Wait, let me look at the calendar again. Its August — not September! Why do the kids have to go back to school when summer is still in full force, it’s hot as the blazes outside, and the water in the pool is just now beginning to feel nice?

They can’t seem to leave anything alone. Now they have even spoiled the beginning of school. I seem to remember that back in the olden days, school started after Labor Day and went to Memorial Day, after which kids might go back to school, but just to pick up report cards and turn in books.

Who is in charge of school calendars now anyhow? Has some bug caused mass insanity by biting every school board member in the entire country? Kids now are going back to school while it is so hot that they have to wear shorts.

Where are the plaid dresses and plaid shirts that used to always mark the beginning of school? It is so hot that wearing a plaid dress would be like committing suicide by heatstroke. Where are the squeaky new penny loafers? Kids now wear athletic shoes that don’t even cause blisters.

Worst of all, they have taken away metal lunch boxes. When I was a kid, if we were lucky, our metal lunchbox might even have a matching thermos bottle with a glass lining. We carried this until the glass liner broke from either dropping the lunchbox or hitting another kid with it.

Of course, we didn’t really need a thermos bottle as we could purchase little boxes of milk for a few cents per day. This was probably part of a school nutrition program of some kind. Now nutrition programs consist of removing the soft drink machines from the school cafeteria.

Kids would probably die if we even suggested such a thing as a metal lunch box. They carry nylon lunch boxes with Velcro fasteners. Gone too are the book satchels of olden times that we carried until the plastic handle broke off. Kids now have nylon backpacks to match their nylon lunch boxes. I don’t know how they get rid of bullies without a metal lunchbox to hit them with.

I suppose I’m just an old fogy who doesn’t understand. In fact, I’m sure I am. There is probably some very good reason why school has to start in the middle of summer when kids ought to be out riding bicycles and swimming while they relish the last few weeks of freedom from responsibility.

Maybe kids retain more knowledge with a shorter break and stay out of the trouble that they might get in from having too much free time. I don’t know. Maybe the earlier school beginning allows kids to get out of school earlier in the spring. Why that is better, I’m not sure.

I supposed educators could explain all of this in a very logical manner. But to my way of thinking, school should not start until after Labor Day. Kids should wear plaid dresses or plaid shirts and carry metal lunch boxes instead of iPods and cell phones. Sending kids back to school in the middle of summer is an atrocity of American tradition!

All I can say is it’s a good thing I don’t have kids in school any more. I would, without a doubt, embarrass them to death in front of their friends by making them wear plaid shorts to school if they absolutely have to go back in the summer.

My stories are about daily life and the funny things that happen to all of us. My columns have been published in numerous newspapers, magazines, anthologies, and websites.
View all posts by Sheila Moss →
This entry was posted in Education, Humor, Rants and tagged Back to school, Backpacks, Metal Lunch Boxes, Old fogy, Penny Loafers, Plaid dresses, School, School break, School Calendar, September, Summer break, Traditions. Bookmark the permalink.