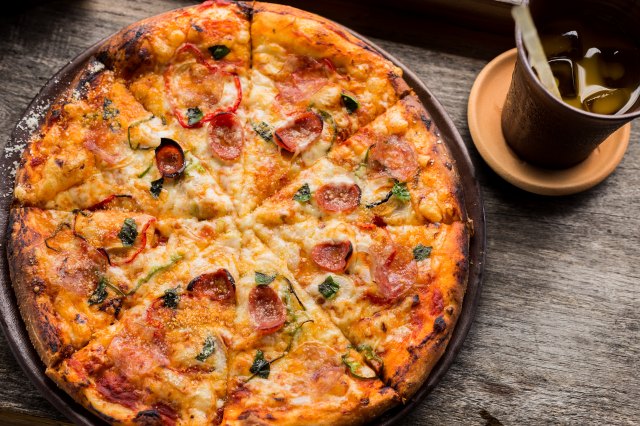 “Can I change my mind about eating out?” I asked.

Then came the usual question, “Where do you want to eat?”

“I don’t care,” I replied. So, he headed down the Interstate. I had a feeling he was going someplace I didn’t want to go, like a sushi bar or a place where we would have to wait forever. I just wanted something simple.

“Pizza would be good,” I mused. “But, I don’t know any place to get pizza except carry-out.” What I meant was something simple like a pizza would be good. Men do not understand subtle hints. Men take everything literally.

“Okay, we will go back and get carryout,” he said, pulling into the turn lane.

He was getting aggravated. “Why, didn’t you say so before I got in the turn lane?”

“I didn’t say to turn, I just said pizza would be good.”

He managed to get out of the turn lane and back on the road without wrecking the car.

By then I figured I’d best keep quiet and eat sushi pizza, or whatever he wanted.

He pulled into a parking lot where there was a pizza store. We got out and went to the door. Wouldn’t you know, it was carryout only? We turned around and left.

“We can eat something besides pizza,” I ventured.

He went to another strip mall. I was afraid to ask why. Then I saw a restaurant with “Pizza” written on the window. “There’s a pizza place!” I exclaimed.

We had never been to this place before, but it looked okay. We were shown to a table and given a menu. “Have you been here before?” asked the waitress.

“I suggest the specialty pizzas,” she said. “You get eight toppings and the price is cheaper.” That sounded good to us, so he ordered an 8-inch veggie special and a lite beer. (He’s on a diet.) I got another one of the specialties, minus the olives.

“Our pizzas are not like the ones they have at other pizza stores,” she said. “They are like the ones up north.” Sure, we thought. That’s what they all say. My partner thinks that the only place you can get good pizza is in the north because he is from Pennsylvania.

I was just happy because there was no sushi at all on the menu.

Anyhow, the pizza came and it was absolutely delicious — best pizza I’ve had in ages. My partner gulped his down. The waitress, evil woman, then came and waved a dish of specialty cheesecakes under his nose.

“They are made with artificial sweetener,” she said. That, was all he needed to hear. He ordered dessert. “But, it’s sugar-free,” he explained to me when I frowned.

In spite of a few mistakes, dinner turned out okay – not counting the crashed diet, of course. “Next time I’m getting a 10-inch pie!” said my partner.

Next time I’m not going to suggest pizza.

My stories are about daily life and the funny things that happen to all of us. My columns have been published in numerous newspapers, magazines, anthologies, and websites.
View all posts by Sheila Moss →
This entry was posted in Food, Humor and tagged Carryout, Cheesecake, cooking, Eating out, Pizza, Restaurants, Specialty pizzas, Sugar-free. Bookmark the permalink.

1 Response to The Pizza Place