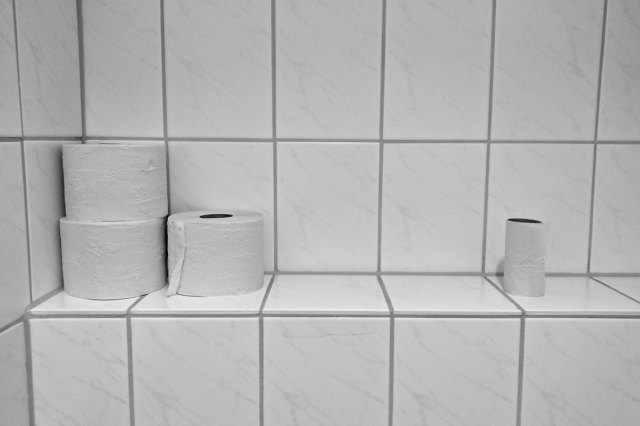 One of life’s most useful but least discussed items is toilet paper. We take the existence of toilet paper for granted and have pretty much forgotten about the days of catalogs, newspapers, shucks, leaves, corncobs and other alternatives used by our ancestors.

Who had the idea of making this product and how did it come to be one of the items we consider as a necessity?

I found out that the story of toilet paper is 2000 years old and related to the story of the invention of paper itself. Toilet paper has been around a long time and was used by the emperor in ancient China. And I thought the Chinese only used paper for lanterns and tiny paper umbrellas.

In the olden days paper was made from old rags, which were shredded, beaten into a pulp, boiled and then rolled into paper. In early America cloth was very scarce and it had to be imported, which made paper very expensive. I suppose Colonial ladies saved their rags to make patchwork quilts.

Americans found ways to recycle paper so that it could be used more than once. The Farmers’ Almanac and Sears Roebuck Catalogs, as well as newsprint, were commonly used in outhouses as an alternative toilet paper. When Sears started printing their catalog on slick paper, customers actually complained.

The first toilet paper in America was sold in pharmacies as a therapeutic product and was saturated with aloe. Some of the of the products being sold nowadays with lotion or aloe sounds like pretty much the same thing to me. Maybe we are not as advanced as we like to think.

The first paper company to produce toilet paper on rolls was the Scott Paper Company. It was such an unmentionable product at the time that they refused to put their name on it and packaged it under the name of the buyers, such as the Waldorf Hotel. Eventually, Scott purchased the name and Waldorf became the most popular brand name sold.

As other companies got into the business of making paper products,
manufacturers began to look for more economical ways to produce paper. Since trees were plentiful, they discovered that chipping up wood, boiling it into a pulp, bleaching, drying and rolling it, could make a satisfactory paper. Northern tissue became successful by advertising its product as “splinter free”.

Other companies also became successful through advertising, such as Charmin’, whose advertising campaign featuring Mr. Whipple and “Please don’t squeeze the Charmin'” as its slogan. In his time, the name of Mr. Whipple was almost as widely known as Richard Nixon or Billy Graham.

Tissue paper is made soft by a process called “creping”, which scrapes paper off large rollers and leaves small wrinkles, which make it flexible while lowering density. At first all tissue was one-ply or one layer thick. Then it was found that two thinner layers of tissue were softer and two-ply tissue became standard.

There are different types of toilet paper, but all are made to dissolve in water to keep from stopping up pipes and plumbing. The invention of modern plumbing had made outside privies very unpopular by then.

In 1973 there was a consumer-created shortage of toilet paper when comedian Johnny Carson made a joke about the U.S. running out of toilet paper. People panicked and rushed to the stores, buying out supplies to hoard. Even though Carson later apologized and said there was no shortage, it took about three weeks to replenish supplies.

Toilet paper now comes in a variety of textures, colors, and scents. It is sometimes used for handkerchiefs, napkins, cleaning glasses, blotting lipstick and many other things besides the use for which it is intended.

Whether you call it toilet paper, toilet tissue, bathroom tissue, TP, or something else, it is one of our most necessary household products – unmentionable or not.

My stories are about daily life and the funny things that happen to all of us. My columns have been published in numerous newspapers, magazines, anthologies, and websites.
View all posts by Sheila Moss →
This entry was posted in Humor, Uncategorized and tagged Alternative toilet paper, History of paper, Household products, Scott Paper, Tissue, Toilet paper, Toilet tissue, TP. Bookmark the permalink.

2 Responses to Mentioning the Unmentionable