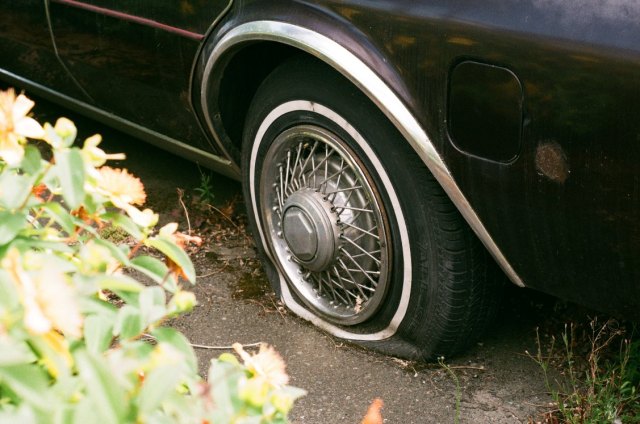 About halfway home from work, there was a loud bang like something had hit the side of the car. What was that noise? Then the car began to drive funny and was hard to control. By the time we got to the right lane, it was obvious we had problems. The tire had blown out and we were riding on the rim of the wheel, barely able to get off the road.

The tire was in shreds. So much for “drive flat” tires.

Here it was about 988 degrees and we were sitting on the side of the Interstate with a flat tire. I called AAA for emergency roadside assistance. “Are you safe?” They asked. I guess that’s a routine question. “About as safe as you can be stranded on an Interstate highway.” At least we were off the road.

AAA would make us a priority, they said. Somebody would be there in 90 minutes. 90 minutes? Good grief. That’s priority? If it takes that long in a populated area, I wondered how long it would take if we broke down in a remote location.

Nothing to do but wait.

We left the motor running so the air conditioner would work and watched the $4 per gallon gas slowly drain away. We put on the emergency blinkers. Cars roared by us at a deafening 70 mph, and we hoped no one would swerve into us.

The police flew by and pulled over a speeder up the road, but didn’t come back to check on us. Not that they could have done anything but call a tow truck anyhow, which we had already done.

Then a car pulled up behind us. The driver said he worked in the automotive field and offered to change the tire. He found the jack under the back seat, got the tire from under the car, jacked it up and changed the tire.

We were soon out of the heat and on our way, thanks to the help of a stranger. I called AAA back to cancel the tow and I told them a Good Samaritan changed it.

Do you know why people who do kindnesses for strangers are called Good Samaritans? It comes from a story about a man who was attacked by thieves and left by the side of the road. Others passed him by without stopping, but a man from Samaria stopped and helped him.

Anyhow, I had planned to go get a haircut that evening, so I went on to the beauty shop after the incident was over. While I was waiting, a lady was there trying to get a haircut and take care of two little kids who were wriggling and crying. Where’s her husband? He should be babysitting the kids.

When finished, the lady tried to pay with a check, but the shop wouldn’t accept checks. After she left to go to the bank for money, another customer who had seen the problem paid her bill as well as his own.

That’s weird! Another Good Samaritan? Two in a row?

Then I realized that I had messed up. Guess I wasn’t paying attention when that last urban legend was forwarded by email. Someone did a random act of kindness for me. This was my opportunity for payback and I let someone else do the paying.

In the legends, someone helps you and then you are given an opportunity to help someone back unknowingly. Undoubtedly, that was the stranger’s wife and kids who didn’t have the money to pay for a haircut. According to legend, I paid her bill and then found out the reason she was there with the kids was because her husband was helping someone with a flat tire on the Interstate.

I never was good at urban legends. I guess that’s why they are called “urban legends” instead of urban realities. In reality, things just don’t happen that way.

My stories are about daily life and the funny things that happen to all of us. My columns have been published in numerous newspapers, magazines, anthologies, and websites.
View all posts by Sheila Moss →
This entry was posted in Automotive and tagged AAA, car problems, emergency, Fate, Flat tire, Pass it on, Random act of kindness, Stranded, Strange coincidences, Urban legend. Bookmark the permalink.

4 Responses to The Good Samaritan