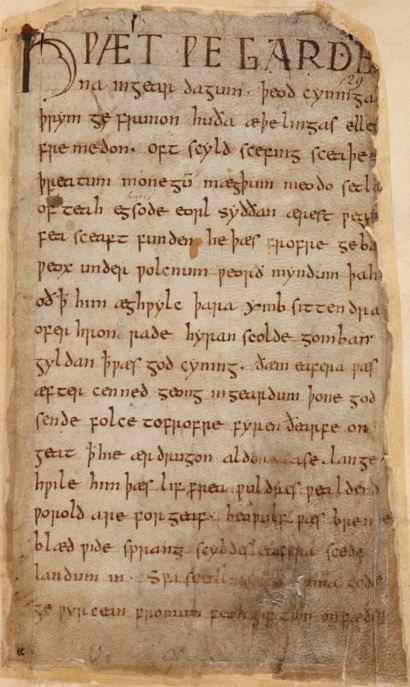 Once again I received a reminder that I’m not as young as I used to be. This time it’s bursitis. It’s pitiful when you get so old that all you have to talk about is your aches and pains. So, I tried to ignore it.  Mind over matter — if I don’t acknowledge it, maybe it will go away.

Unfortunately, this ache was in my right shoulder and I’m right-handed. It was starting to affect my computer arm. As much time as I spend clicking a computer mouse, it was starting to get down-right aggravating.

You can only ignore pain for so long. My mind over matter theory was melting quickly. I tried warm showers, long soaks in the tub, ice packs, and the old stand-by favorite, menthol rubs. Have you tried those new stick-on patches with icy-hot menthol built in? As good as they are, it was obvious that I needed something more than a stick-on patch.

“I feel like the monster in Beowulf!” I told my honey. Most people have studied the ancient epic poem called Beowulf, probably in a high school literature. To refresh your memory, Beowulf was the young hero of the story. To make a long classic short, Beowulf saved the mead (beer) hall when he killed a beast named Grendel by pulling it’s arm out of the socket. [Maybe that was how arm wrestling was invented?]

Regardless, it was time for me to see a doctor.  I couldn’t wait for an appointment by now. I was in too much pain. I considered an emergency room, but I was rather embarrassed to go to an ER for something that had had been hurting for two weeks. Why do we do things like this?

I went to the local urgent care clinic, sometimes called a “doc-in-the-box.”  Doc was sympatric and gave me a shot of cortisone and prescription for muscle relaxers.

I quickly forgot that I was as ancient as the Beowulf epic and went right back to my regular routine. As you have probably guessed, as soon as the cortisone shot wore off, my pain came back. By this time the bursitis was a raging monster, threaten to devour my entire arm.

I’d better go to an orthopedic doctor. But I couldn’t wait. I had let it get out of control again. So, it was back to the old urgent care clinic. I knew the routine by now. But this time the doctor was a different one, a female. She was not as understanding.

“You’ve been here for this before?” she asked. I nodded in the affirmative. Old grouch, I thought. “You need to see your primary care doctor,” she said.

The doctor is telling me to see a doctor? What is she? Anyhow, she did give me another short of cortisone.  Funny thing about cortisone, it can makes things hurt much worse before it starts feeling better. Now I know why Grendel died of a displaced arm. I thought I was going to die too.

I finally called my primary doctor and made an appointment. Dr. Grouch at the clinic mentioned that I might need physical therapy. But, my arm is starting to feel much better today. I don’t know why I’m going to the doctor Monday when I feel fine on drugs.

As I said, it’s pitiful when you get so old you have nothing to talk about but your aches and pains. If my arm comes out of the socket, though, I won’t be able to type; so I figured I’d better get my column written while I still can.

If there is no column next week, you will know I have died of Beowulf syndrome.

My stories are about daily life and the funny things that happen to all of us. My columns have been published in numerous newspapers, magazines, anthologies, and websites.
View all posts by Sheila Moss →
This entry was posted in Health, Humor and tagged Aches, Ancient Literature, Bursitis, Cortisone, Grendel, Legends, Menthol patches, Shoulder pain, Urgent care clinic. Bookmark the permalink.

2 Responses to Beowulf Was Here