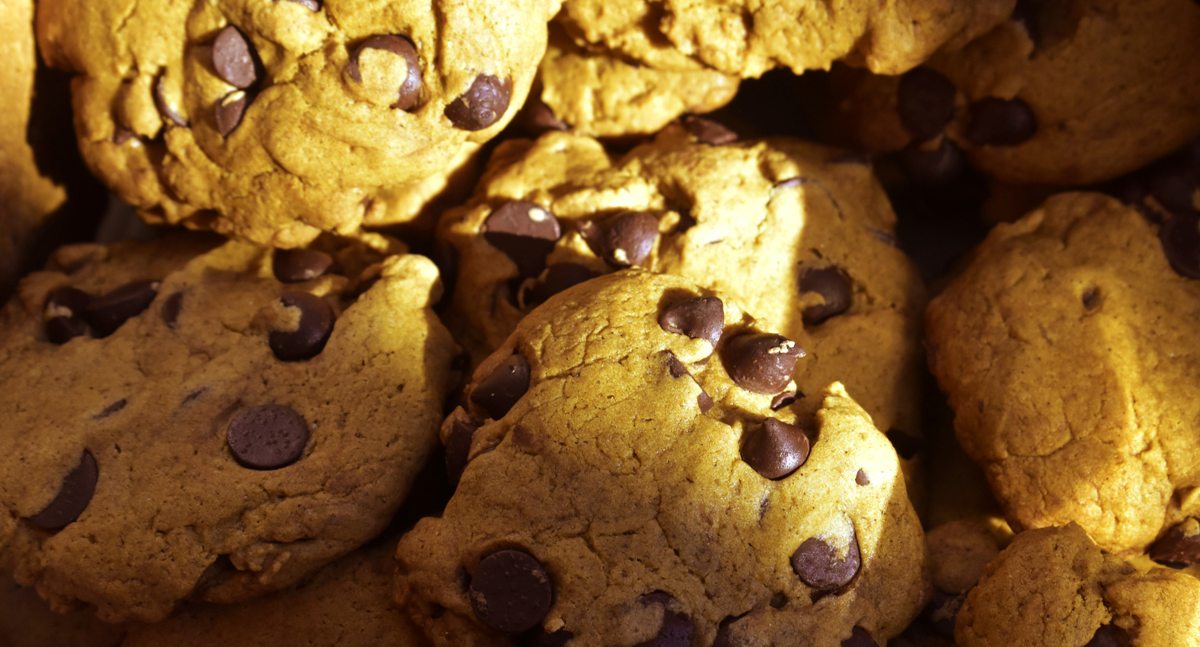 My son decided to bake cookies. He doesn’t usually cook, so I’m not sure what got into him this particular time. I think he was really hungry for cookies and couldn’t talk his sister into baking them. Chocolate chip cookies are a powerful incentive.

He used to cook at a restaurant in one of the odd jobs he had while finding himself. Now that he no longer works as a cook, he likes to pretend that he doesn’t know how to cook any more. I think it is one of those male ego things. They want to say that anything they are too lazy to do is “woman’s work.”

I decided the best thing for me to do was to stay out of the kitchen before he decided that mom might be talked into making cookies if he pleaded amnesia. Not a chance. I passed along the family recipe and told him, “These are the ones Grandma Moss used to make.”

After the mixer quit running and I thought it might be safe, I went into the kitchen to get a drink of water and check out the damage. He was throwing the handle of my big wooden spoon into the trash can. Obviously inferior, it couldn’t stand up to his mixing skills.

“It is okay to mix them with your hands,” I offered.

“I’m not putting my hands in that stuff,” he declared.

It was time for me to return to watching TV. It was too late to save the spoon anyhow.

Later I slipped into the kitchen again for another peek. He had finished mixing and was dropping batter by spoonfuls onto a cookie sheet. They looked awfully close together. Making cookies is not like grilling steaks. They spread when they are cooking.

“I’m almost done,” he told me. “I’ve finished mixing them.” But, mixing is only half the work in cookie baking. The real work is baking them, batch after batch. I resisted the urge to say anything as I didn’t want him to get the idea that cooking can be done better by a woman than a man.

“Do you think there is something wrong with him?” my daughter whispered. “I’ve never seen him bake anything before.”

“He has probably been watching Chef Ramsey on TV,” I assured her. Men just pretend they can’t cook. Why not, if they can get someone else to do it?

So far, so good — the smoke alarm has not jumped off the wall and committed suicide yet. Funny, though, I don’t smell cookies baking. Against my better judgment, I decided I’d better check the situation again.

The light was out and all was quiet. I flipped the switch. The cookies were done except for the last sheet which was still cooling in the pan. The sink was full of dirty pans and dishes. No wonder he turned out the light.

He was in his room lying in bed resting. Apparently, by the time he finished baking, he was too tired to eat them.

I began washing the pans that would not fit into the dishwasher. I would need the kitchen tomorrow and couldn’t function with dirty dishes everywhere. I wonder who he thought was going to clean up the mess? Elves?

I must admit that the cookies looked really good, though. He better watch them or they will disappear just like the batch that his sister made last week. Somehow, cookies always disappear and no one admits eating them, I thought, as I helped myself to a large one.

Yes, he could cook just as well as a woman. Now if I could only convince him that a man can also wash dishes just as good as a woman — maybe even better.

My stories are about daily life and the funny things that happen to all of us. My columns have been published in numerous newspapers, magazines, anthologies, and websites.
View all posts by Sheila Moss →
This entry was posted in Food, Humor and tagged baking, batter, Chocolate Chips, cookies, cooking, male ego, mixing. Bookmark the permalink.