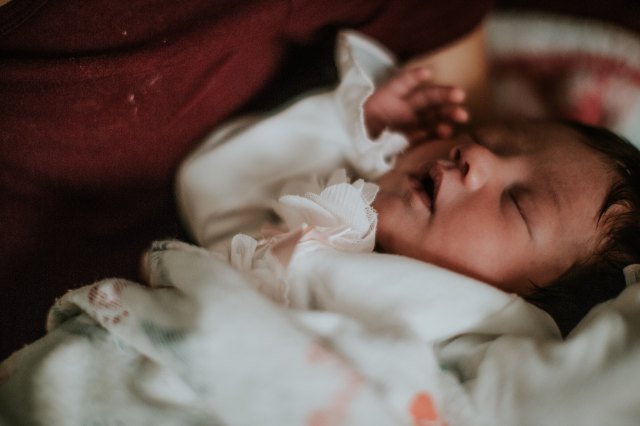 My grandaughter came to visit last week. She is five months old, a cute little bundle in pink crawlers with enough black hair that we can cut it soon and sell it to the hair-club for bald babies.

My daughter had some errands to do, and grandmothers, of course, are forever-willing babysitters for adorable grandchildren who look at them and smile with two white teeth and black eyes the size of saucers.

It is not until mom is out of the driveway that grandchildren show their true colors. The instant baby realized that mommy was gone, she looked at her smiling grandma as if she was a reincarnation of Attila the Hun.

A blood-curdling scream emitted from her with a magnitude of 3.5 on the rector scale. “Oh, isn’t that cute? She misses her mommy!” It was amusing for about 3 whole minutes when the sound waves began to penetrate my brain and melt it into a puddle of plasma.

I tried to distract her with the dancing Hokey Pokey toy that made her laugh and nearly jump out of her diaper when mommy was here.

“You put your arm in and you shake it all about!”

“You do the Hokey Pokey and your turn yourself around”

Well, that may be what it’s all about in Hokey Pokey Land, but in grandma’s living room what it was all about was screaming like an opera soprano hitting a “high C”. Who needs an iPod to make you deaf when you have a baby?

Nothing I could do would turn off my little high fidelity sound machine. We rocked, we read books, we rattled rattles, we sang songs, and we changed diapers that were not even wet.

It became apparent that baby was going to scream until mommy returned or the baby passed out from exhaustion, whichever came first. I warmed a bottle and popped it into baby’s mouth like a cork. Finally, she fell asleep exhausted and napped for a blissful 30 minutes.

The eye of the hurricane was past, but when she woke up, the screams started again from the other direction. We bounced, we did more Hokey Pokey, we played musical ABC’s, we read the 1-2-3 Book, and we played every musical tune in the Baby Einstein top ten.

She actually liked the musical toys. Sometimes she would laugh and cry at the same time. That’s a neat trick. I wish I could learn how to do it. I was afraid she would make herself sick crying, but she only got the hiccups — another good reason to scream.

Finally, “The clock struck 6:00; the mouse ran down; Hickory, Dickory, Dock.” It was time to take her home. It took me 30 minutes to figure out how the car seat worked and another 30 to pack up all the baby gear that modern babies need to reinforce their hysteria. But the instant we hit the road, she passed out cold and the concert ended before the car got out of the driveway.

By the time we got to my daughter’s house, baby pink pants was wide-eyed and all giggles. She smiled at her mommy, practically leaped into her arms, and looked at me as if I was a demented terrorist kidnapper who had been foiled.

All the books say that there is no such thing as spoiling a baby. It’s called “separation anxiety.” I suspect it’s the same symptom by a different name. Something is basically wrong here, though. I thought it was a Grandma’s job to spoil the baby rotten and then let mommy deal with it.

My stories are about daily life and the funny things that happen to all of us. My columns have been published in numerous newspapers, magazines, anthologies, and websites.
View all posts by Sheila Moss →
This entry was posted in Family, Humor and tagged Baby, Babysit, Crying baby, Dancing toys, Grandaughter, grandchildren, Hysteria, Separation anxiety, Spoiling a baby. Bookmark the permalink.

7 Responses to Please Help the Babysitter