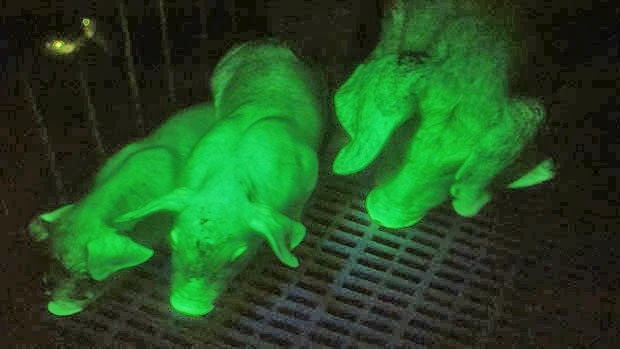 I read an article in the paper about some scientists in Taiwan who had biogenetically engineered three green pigs that glow in the dark. Apparently this was big news at the time, but some of us are a bit slow finding out about it.

I knew about the glofish that were being sold as neon glow-in-the-dark pets. However, it seems there are now all sorts of glowing animals. An artist has created a glowing bunny and there are also glowing mice that have been genetically changed.

Scientists do this by taking genes from jellyfish, which glow naturally, and inserting them into the fertilized egg of the animal they are trying to reproduce. Sometimes it works and sometimes not, but in the case of the pigs, it worked at least three times.

Of course, the way the human mind operates is to instantly jump to the conclusion that the next thing will be a green glow-in-the-dark human. We have seen too many mad scientists in science fiction movies to think otherwise.

If we could engineer babies to glow pink and blue, it might be more appealing. Of course, I suppose there would always be those people who think that pink and blue babies are gender biased though and would insist on having a yellow glo-baby instead.

The point of all this genetic engineering is supposed to be the study of stem cells and disease and the ability to trace a glowing cell in the body much easier than would be possible otherwise. Scientists assure us that creation of Franken-babies is not the goal of their research.

It is supposed that when two genetically altered green pigs mate, the offspring will also glow without further human intervention. But what about when pink and blue adults have children? Would the offspring be pink if girls and blue if boys or some weird combination of both that might make them purple? The trouble with this whole thing is that we really are not sure what might result.

Probably you think I’m just making an inductive leap here and that biogenetic  engineering on humans is not in the future. But scientists have tried to produce a green monkey already, which is the animal most genetically similar to man. Maybe the little green men of science fiction fame are not as far-fetched as they seem to be.

It is sort of the opposite of the repressed desire of people to become invisible. Instead people would always be visible, even at night. It would be hell if we re-engineered nocturnal creatures that depend on hunting at night to camouflage them from their prey. However, the cat could no longer run off at night and refuse to come inside.

If jellyfish or ocean creatures occur in enough different colors, people might be able to choose designer colors for their offspring, creating a whole new breed of humans. Imagine a nightclub full of people all dancing and glowing in different colors.

Other than for novelty and amusement, I can’t really see much point in making a green human. But, if it can be done and the technology is there, you can be pretty sure that sooner or later it is going to happen, regardless of complaints about the moral implications. Fears of a “brave new world” might become realities.

Pick a favorite color, just in case you need one.

My stories are about daily life and the funny things that happen to all of us. My columns have been published in numerous newspapers, magazines, anthologies, and websites.
View all posts by Sheila Moss →
This entry was posted in Humor, Technology and tagged Biogenetics, Brave New World, Fluorescence, Genetic altering, Genetic engineering, Glo-in-the-dark, Glowing animals, Glowing mice, Green monkey, Green pigs, Jellyfish. Bookmark the permalink.
Pages from my Crazy Life