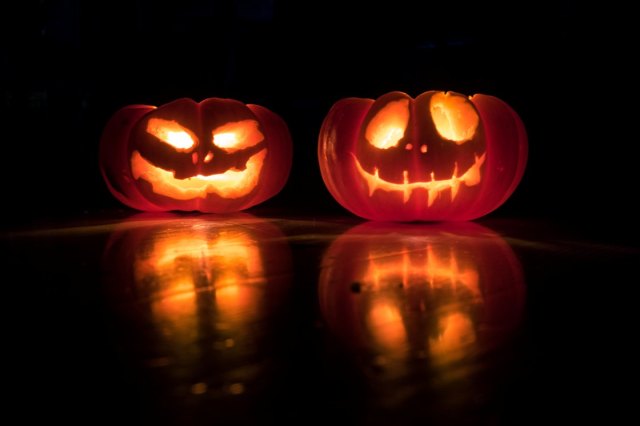 Most people don’t know this, but when my kids were small, I became rather adept at carving jack-o-lanterns. I thought that I could put away the carving tools when I became older and just make pumpkin pies or pumpkin bread, the way a respectable grandma should.

“Do you want to go to the pumpkin farm and get a pumpkin?” I asked my grandson, envisioning the colorful photos I would take among the pumpkins, gourds, and Indian corn.

But when arrived there, he ran from one thing to the next so fast that there was no hope of getting a picture of anything but a blur. He petted the farm animals, and ran through the corn maze where I got lost on the muddy path. I thought I’d never find my way out of the thing.

We now would select a nice child-size pumpkin to take home.

He choose the largest pumpkin he could find off the $12 table, while I looked longingly at the smaller $3 pumpkins all the other children were carrying away.

We could just set the huge pumpkin on the porch for a harvest decoration, I figured.

We were hardly inside the door until my grandson was ready to carve. “I want a scary face!” he declared.

We surfed the Internet looking for designs. Such artistic creations I’ve never seen in my life! I thought jack-o-lanterns were just a mouth, nose and two eyes, not masterpieces of vegetable creativity.

My grandson had his own idea of the perfect pumpkin and drew a picture of what it should look like. Thanks goodness, his idea was closer to mine than to the more elaborate stuff.

“Grandma will do the knife part. Get a spoon and you can help with the inside.” He assured me that he knew how to use a knife. I assured him that he didn’t.

We decided do the honors outdoors so we wouldn’t have a big mess in the kitchen. After much cutting and tugging, I finally managed to cut the top off. Now he could scoop out the pulp inside.

“Yuck! I’m not touching that stuff!” he proclaimed. How a boy could like snails and frogs and not the inside of pumpkin, I’m not sure, but I got to scoop out the pulp too.

Bees were attracted by the fresh smell of pumpkin and began buzzing around my head. I swatted bees away with one hand and carved with the other. This job should be completed in about half an hour.

“You’re not doing it right! Carve this part! Where are the eyes? There’s still three seeds left inside!” proclaimed the pint-sized critic. Big pumpkins have extra thick and extra tough shells, I discovered. We labored on into the long afternoon, me carving, him supervising.

The neighbor across the street decided it was the perfect time for a bonfire, and the smoke drifted over into my yard. “Where’s the smoke coming from?” Surely it wouldn’t continue.

We inhaled smoke, scooped pulp, fought bees, carved pumpkin, and wiped sweat until the last feature was carved, the last plug removed, and the pumpkin was finished – one tooth on top, two on bottom, just like the picture. By the time we finished cleaning up pumpkin seeds and hosing down the patio, I was ready to retire from the pumpkin carving business — forever this time.

I may have to change my mind because I don’t know whose grin was the biggest, my grandson’s or the pumpkin’s.

My stories are about daily life and the funny things that happen to all of us. My columns have been published in numerous newspapers, magazines, anthologies, and websites.
View all posts by Sheila Moss →
This entry was posted in Crafts/Hobbies, Family, Humor and tagged Carving, Fall, Halloween, Harvest, Jack-o-lantern, October, Pumpkin. Bookmark the permalink.