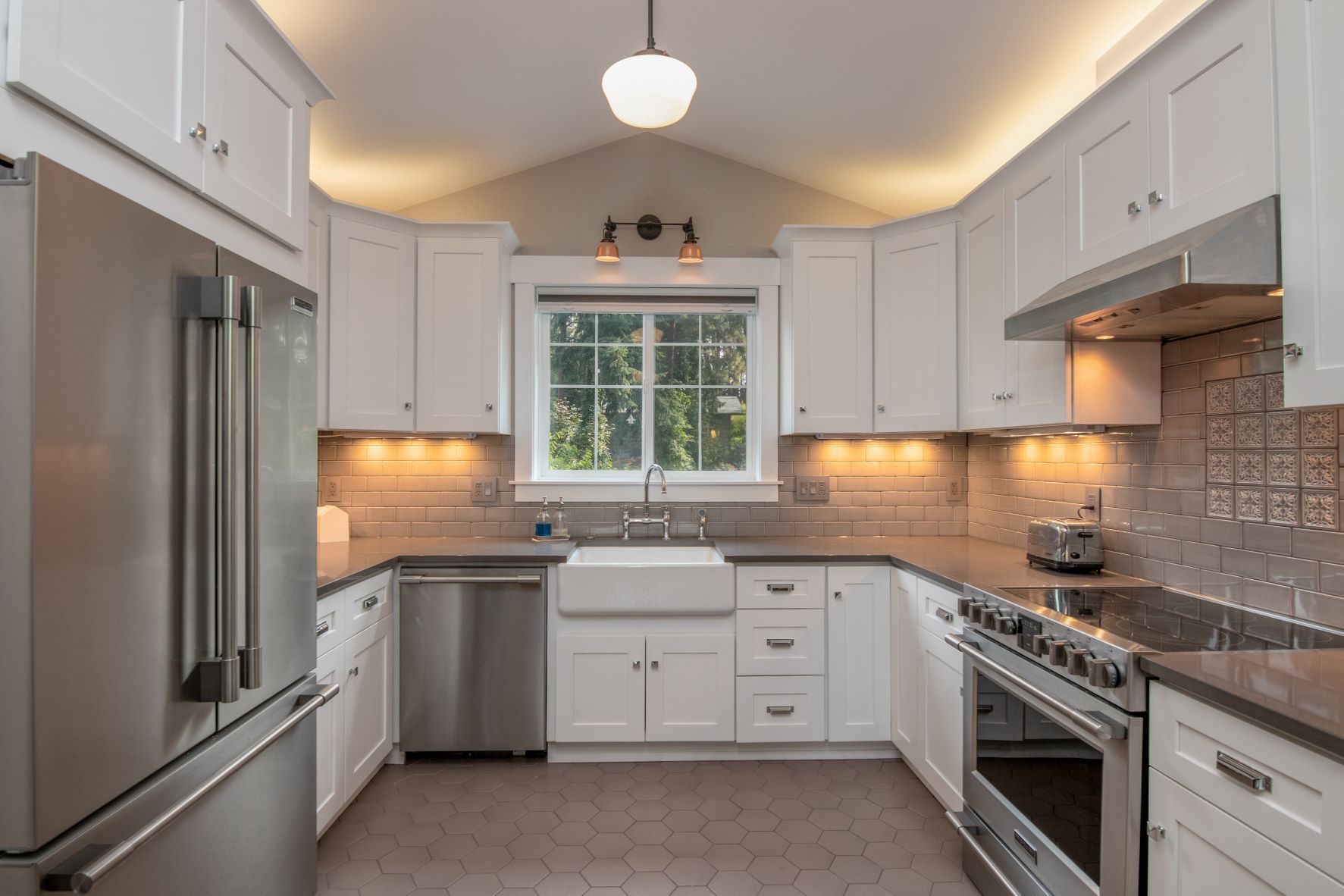 “What’s that?” I thought. I noticed a small puddle on the floor and wiped it up with the dish towel. Then I realized the refrigerator was either incontinent or water was leaking from somewhere.

The refrigerator repairman told me the line to the icemaker had broken but the problem was caused by a valve in the plumbing. “Call a plumber,” he advised. “Plumbers always want to cut holes in the wall,” I thought. After the plumber came and cut the obligatory hole, the refrigerator guy came back and fixed the fridge that had nothing wrong with it.

“Well, that takes care of that.” The damage to the floor wasn’t that bad and was mostly behind the refrigerator.  Little did I know that what was visible was only the tip of the iceberg.  The water had not stayed on the surface, but most of it leaked underneath the hardwood floor.

In about a week, I noticed a bump in the floor. “What’s wrong with this floor?” the kids asked. It was water warping the wood. “Maybe it will go away,” I hoped. But it didn’t.  It grew worse and soon another bump appeared in front of the refrigerator.

When I explained the problem to a contractor, he suggested I contact my homeowner’s insurance. “This must be bad!” The bumps continued to swell until they exploded and the floor cracked open. My kitchen floor had more waves in it than a skateboard rink.

Workers came and my kitchen furniture was moved to the garage. The kitchen floor came out with a crowbar. Three hot fans and a massive dehumidifier were the new décor. The bedrooms were sealed with floor to ceiling sheets of plastic which were supposed to keep the heat and noise down, but didn’t help much.

The plastic had a zipper like a tent door which was a good thing as we were starting to get hungry. My kitchen, however, was a hot swirling whirlwind of sawdust and dirt blown around by the fans. Cooking was impossible as the refrigerator was now in front of the stove — a good excuse to eat out.

We could watch television in the sealed plastic annex we used to call the living room, but the roaring inferno in the kitchen was so loud we couldn’t hear it. We turned on the closed captioning function of the TV. The heat was unbearable and even though we left the air conditioner on, it didn’t seem to help much.

By the second day the house was 82 degrees. It was cooler outside than inside. We turned off the air conditioner and opened the windows. I moved to the bedroom. I decided I would camp there with the ceiling fan on and the windows open until this was over. After three long days, the house was declared dry and the fans and plastic tents removed.

Apparently, trying to cool the overheated house had caused my air conditioning to have a nervous breakdown as it was not working. I later found it was something about the fan not running and the compressor shutting down. I never did really understand.

So, I am left with no floor, a broken air conditioning, a hole in the wall, and an inch of dust on everything. The new contractor is coming to reinstall the floor and the sawing and hammering will begin again.

I can hardly wait.