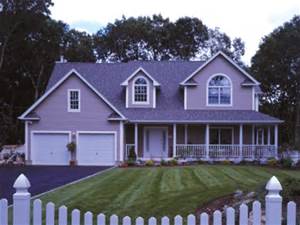 “I never saw a purple cow, I hope to never see one,” said the poet. But purple is not only unpopular as a color for cows, it is also frequently frowned on as a color for houses. “World Net Daily” reported that a Florida city passed a new law against purple houses after a local man painted his house purple and gold because these were the colors of his fraternity!

To prevent the outlandish actions of some homeowners, who have the audacity to think they can do what they want with their own property, some areas have formed planning committees for assuring that colors are attune to the tastes of the average homeowner.

In other words – NO purple!

Those with an unconventional taste for purple feel that the ability to enjoy living in your home is first and that the resale value is a secondary consideration. On occasion, disgruntled homeowners have deliberately painted their house deep purple as protest against zoning laws they don’t like or to retaliate against grumpy neighbors. Maybe we should all go next door right now and apologize for anything we may have done wrong before it’s too late.

People sometimes become irritated with their nonconformist neighbors because they feel purple houses are ugly and devalue the surrounding property.  Neighbors became angry when one woman in Manhattan painted her house purple to honor her favorite sports team. She said she doesn’t care about resell value because she plans to never move. Neighbors are probably planning a torch party right now.

Frequently a purple house is painted purple as a part of a remodeling project. A San Antonio woman who was doing extensive remodeling painted her house purple. She said that purple was an important part of her cultural heritage. However, city planners didn’t give a whit about heritage and said they had not given permission for the purple paint job. Her house became the center of a controversy as well as a popular attraction for picture-taking tourists.

It seems there are actually many people who do not mind being a purple cow. Purple houses can be found in all parts of the country. Victorian houses, especially, are popular since tradition-breaking colors accent the ornate gingerbread trim. San Francisco has become famous for old Victorian houses painted in outlandish colors. The colorful hues were the key to revitalizing a blighted area of town. Of course, San Francisco is famous for a lot of unusual things.

The lovely Victorian homes of San Francisco have become known as “Painted Ladies,” taking the name from the painted women of its rowdy past. Following San Francisco’s example, other cities have attempted to revitalize urban areas with Painted Ladies of their own. St. Louis has restored the elegant Lafayette Square and Madison, Wisconsin has an East Side neighborhood with elaborately painted homes in a rainbow of hues. Why should San Francisco be the only one to admit they have a bawdy past? 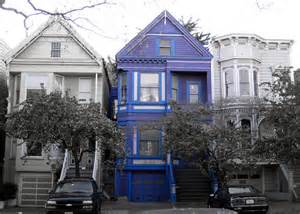 Children sometimes read a book called “Mr. Pine’s Purple House,” which teaches the importance of nonconformity and expressing individuality. Of course, most of us do not live in historic Victorian neighborhoods these days. We live in subdivisions and condos. Our neighbors most likely would react to an expression of individuality like the council in England that ordered a row of brightly painted townhouses be repainted and toned down. Obviously, not everyone goes by the book.

My neighbors will be relieved to know that they don’t have to worry. Not knowing it was chic to think purple, I painted my house in a conventional color of gray. I won’t be repainting any time in the near future, and if I did it would be green, blue, yellow or even red – anything but PURPLE!

My stories are about daily life and the funny things that happen to all of us. My columns have been published in numerous newspapers, magazines, anthologies, and websites.
View all posts by Sheila Moss →
This entry was posted in Home, Humor and tagged controversal colors, devalue property, disgruntled homeowners, homeowners associations, nonconformity, Painted Ladies, planning committees, Purple, purple houses, remodeling projects, resale value, Victoria houses. Bookmark the permalink.

3 Responses to Painting a Purple House