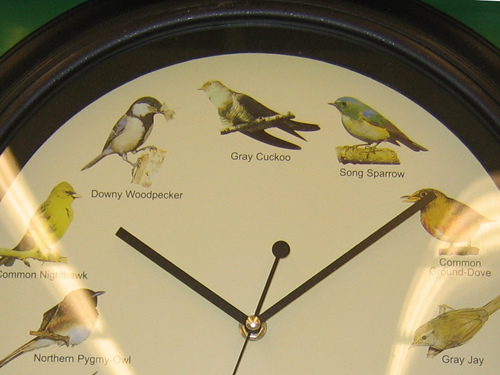 I previously wrote a column called “Singing Bird Clock.” It has remained a perpetual favorite with readers. Probably all of you already know what a singing bird clock is, but just in case, I’ll explain it one more time.

First, a singing bird clock is not to be confused with a cuckoo clock, which also sings, but is an entirely different type of clock. By the way, a clock-fixing friend of mine says that cuckoo clocks do come from Germany, but they are made for the American market not the locals. What a disappointment.

Anyhow, I just want to make it clear that we are not talking about a little bird popping out of a carved wooden clock. I’m sure, however, that any cuckoo is a cut above a singing bird clock. Singing bird clocks are usually wall hanging, battery-operated clocks with pictures of birds replacing the numbers. Every hour, you get a different bird sound.

Now I thought the singing bird clock was bad, until I found out there are much worse ones out there. Due to the success of the birds, there are now clocks that make all sorts of sounds. One friend actually confessed to buying a barking dog clock in a moment of mental fatigue. A different dog barking every hour? I don’t think I need that.

My clock, as I said, is ultra cheap – a piece of junk. An over-powering whelm of some sort must have caused me to buy it. At one time these clocks were highly advertised on television. I hate to think I was brainwashed by a TV ad, but I have a feeling that’s what happened. While newer, more expensive models have pleasant bird sounds, the piece of junk I have has birds like owls and woodpeckers.

Anyhow, my cheap-o clock stopped singing several years ago. I thought it was the batteries, but I replaced them and still not a peep. Oh well, it still kept time. I just left it hanging and decided it was really not so bad the way it was. It was sort of peaceful without the owl hoots.

The other day my cat was prowling around looking for trouble, as usual. For some reason the motion of the clock hands caught his attention and he decided to inspect it. Somehow the cat managed to climb furniture to the clock and knock it off the wall and onto the floor.

“That’s the end of the singing bird clock,” I figured. Not a great loss. I had passing thoughts of getting another one – a better one this time. But, I picked up the old clock and replaced the batteries that were knocked out when it fell, and it began to sing.

I couldn’t believe it. The cat had fixed the clock!

I returned it to the wall and it has been hooting, pecking, and singing happily ever since. The cat is quite pleased with the clock now. You can imagine what an entire chorus of singing birds does for a cat when merely the motion of the hands attracted him.

The strangest thing about this clock is that people reading my first column write me to ask where they can buy a clock like this. Some people even try to buy my clock, figuring I don’t like it anyhow. It seems that they quit making this particular hoot-owl version. Small wonder. Some folks had a sentimental attachment to it, broke it, and want another one “just like it.”

I don’t have any clocks to sell. Furthermore, I now am becoming rather fond of my clock and have almost developed a sentimental attachment myself since the cat fixed it. I’m thinking that maybe the cat and I should go into the clock repair business.

AUTHOR’S NOTE: For those who can’t read enough about bird clocks, the original bird clock column can found in my blog archives.

My stories are about daily life and the funny things that happen to all of us. My columns have been published in numerous newspapers, magazines, anthologies, and websites.
View all posts by Sheila Moss →
This entry was posted in Home, Humor and tagged barking dog clock, battery-operated clocks, birds, clock repair, clocks, cuckoo clock, singing bird clock, wall clock. Bookmark the permalink.