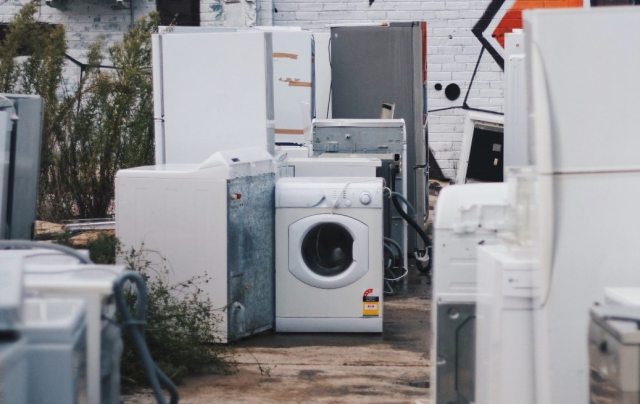 “Bang! Pow! Take that, you good for nothing box of bolts!”

My friend Kathy tells a story about getting angry with her computer and shooting it. Kathy tells some wild tales and it is hard to know when it is merely fantasy; however, she declares that she is telling the truth and that she has the receipts to prove it. Unfortunately, the bullet went through the wall and shot her clothes dryer also, which worked just fine and didn’t need killing.

I guess everyone has felt frustrated enough at some point to kill an appliance that wouldn’t work. There is the famous story about Elvis shooting his television set. I’m relatively certain it is true as the television set is on display at Graceland and I’ve seen it there with the screen broken.

I once saw a guy on the Tonight Show that had pulled out a gun and shot a vending machine that cheated him out of his money. I can relate to that. Nothing makes me madder than a thieving vending machine that keeps my money. Do you put in more change or do you give up before it cheats you again?

I can think of lots of things to shoot.

My old refrigerator certainly deserved being shot when it quit cooling. I guess it didn’t really need killing, though, since it was already dead. I got a new side-by-side out of the deal and the old refrigerator is resting in peace somewhere. I have a feeling that old appliances do not go to a dead appliance heaven.

My computer would certainly be long gone. I have had the urge to shoot it numerous times. Nothing is more aggravating than the blue screen of death, a program that freezes, or turning it off and having it boot up in safe mode. My blood pressure goes over the top. I hate having to spend a day trying to fix a contrary computer when I have other things to do. “POW! So you want to crash, huh? I’ll show you how to crash –permanently.”

My dishwasher also went the way of the dead appliances. Unfortunately, it too died before I had an opportunity to shoot it. Somehow shooting an appliance that is already dead just doesn’t seem like much of a sport.

The big screen TV died a few weeks ago. I was sort of enjoying the peace and quiet, but honey had the stupid thing fixed. My fantasy is to shoot it and get my living room back. One of these days… POW! If anything has a contract out on it around here, it is that big screen TV.

My cordless phone with the static needs to go… POW!

My poor old dryer wouldn’t suffer much if a bullet went through the wall and put it out of its misery. The button that changes the temperature from high to perm-press is long gone and the handle on the door is broken. It would actually be better off dead.

The microwave still works, but the light inside no longer comes on… POW! That will teach it to conk out on me.

While I’m at it, I might as well shoot the stove. The oven light quit working so long ago that I don’t even miss it any more. And the stove is that ugly beige color that once matched the refrigerator before I got the new one. Is it fair to shoot something just because it is ugly?

I guess I’ll have to keep putting up with these half-dead appliances or start my own appliance cemetery. It was probably just as well that they did not have appliances in the days of the Old West or Boot Hill would have been a landfill.

If they come and haul me away in the padded wagon, you’ll know that I finally went postal.  Come to think of it, I might as well put this column out of its misery too… POW!

My stories are about daily life and the funny things that happen to all of us. My columns have been published in numerous newspapers, magazines, anthologies, and websites.
View all posts by Sheila Moss →
This entry was posted in Humor, Technology and tagged Aggravation, Appliances, Broken appliances, Elvis's TV, Frustrations, guns, Non-working, RIP, Shooting. Bookmark the permalink.

2 Responses to A Shooting Spree