What to Do with a Brass Moose 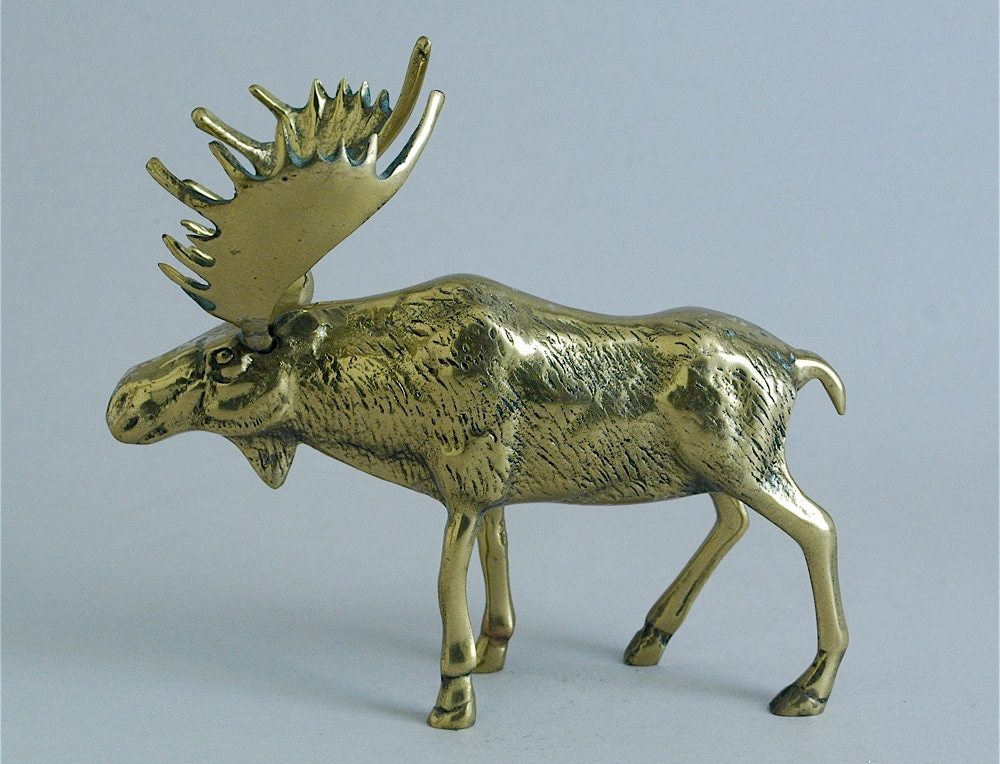 The paper said that the work of art would likely be melted down and sold for scrap metal. It seems that there must be more creative ways to use a 600 pound moose than that. Selling it for scrap metal hardly seems worth the trouble.

I have been trying to think of some alternatives to help save a work of art:

Put it beside the front door of your home and use it for a coat tree or hat rack. Of course, you would need plenty of room for a bass moose that big. If you are a redneck, you could put it on the front porch beside the couch and old washing machine.

Around here people are always looking for something to hold their mailboxes that can’t be knocked down by mailbox bashers or backed over by the neighbors across the street. The moose would look great beside the driveway holding your mailbox. You could plant climbing ivy on it and let it wind around the antlers. Or, if you are in a big hurry, you could use kudzu, the vine that ate the South.

In the back yard you might use it for a bird perch or let the bird use the antlers to build nests. You could even use it to hang your Rock City birdhouse. Conversely, you could put it in the garden and use it as a scare-crow moose. Be aware, though, it might make a handy pit stop for pets in the absence of fire hydrants.

Of course, it would be a great addition to a children’s playground. Children would love having a brass moose to ride while playing pretend cowboy. You could even put rockers on it and make a rocking moose.

At Christmas, you could string mini lights around it and put it on the lawn for a decoration instead of using reindeer.

Assuming you could get it through the door and have several friends with strong backs to help move it, there are many uses for a brass moose inside the house, and I don’t mean as a conversation piece either, although it would definitely be that.

It could be used to hang umbrellas in an entrance hall or as a coffee mug rack or pot rack in the kitchen. You could hang towels on it in the bathroom if, like me, you never seem to have enough empty towel racks. In the bedroom you could use it for hanging neckties, organizing belts, or to hold those extra blankets that you don’t know what to do with.

You could cut a hole in the wall and stick the head through to make a trophy wall piece that would really impress the guys from the lodge. You would not need to shoot it since it is already petrified. The guys would never know that you do not have a freezer full of moose meat.

In addition to melting statues and selling them for scrap metal, thieves sometimes resell the statues they steal. Do they put it on Craiglist? Who buys a brass moose? A lodge, a western wear store, a saddle shop? A barbecue restaurant? I suppose it would be great to advertise a sale on Moose Tracks ice cream or Moose Munch popcorn snacks.

Actually, there is only one really good thing I can think of to do with a 600 pound brass moose. That is to put it out on the front lawn and hope that someone will steal it.

My stories are about daily life and the funny things that happen to all of us. My columns have been published in numerous newspapers, magazines, anthologies, and websites.
View all posts by Sheila Moss →
This entry was posted in Home, Humor, Southern Humor and tagged Advertisement, Brass, Bronze, home decor, Lawn decorations, Moose, Scrap metal, Statue. Bookmark the permalink.

3 Responses to What to Do with a Brass Moose