“We need to do something different for a change,” I yawned one lazy Saturday morning.

“Let’s go to Chattanooga,” said my honey. I knew he was referring to the Aquarium.

“Let’s go to Rock City instead,” I suggested. “We haven’t been there in ages.”

“I’ve never been,” he replied. That settled it. And so began my adventure.

It was several weeks after this conversation before we could get our act together enough to actually do the deed. Every weekend, we had other plans, had something else that had to be done – or it rained.

Finally, last weekend we decided this was it.  The day was beautiful, unseasonably cool and clear. It was a wonderful day for an outside adventure.

Is there a person in the entire United States that has never heard of Rock City? I doubt it, especially in the South. It is the granddaddy of roadside tourist attractions built way back in the 30’s by the same guy who invented miniature golf, if you can believe that.

It became famous not so much for the location itself as for an aggressive advertising campaign. “See Rock City” was painted on the roof of barns along highways all over the South in an ingenious scheme to draw tourists off the beaten track. It worked beyond anyone’s wildest dream.

Rock City is on top of a mountain and the only way to find it is to follow the signs up a winding, curvy mountain road. Once there, a flagstone walking path winds its way through rock formations, up and down steps, and across a suspension bridge. Stone benches provide ample opportunities for picture taking.

At the top of Lookout Mountain is the fabulous view that was immortalized in the commercial advertising slogan, “See seven states from Rock City.” Well, it’s hard to know what state you are seeing, but it is a fantastic view overlooking the city and miles beyond, so why argue. 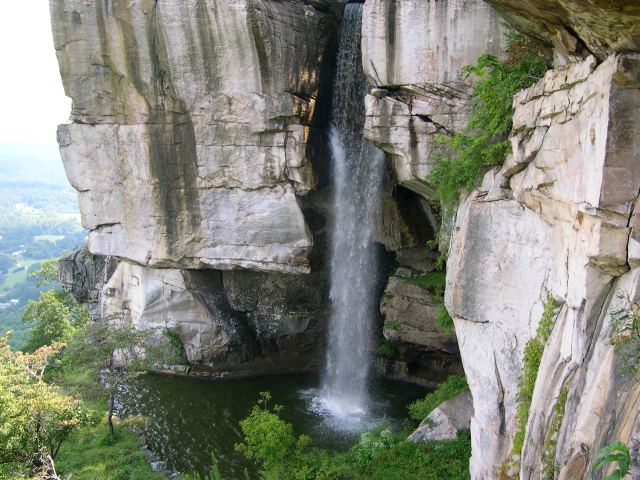 On the winding trail down the mountain, there are overlooks offering a view of the waterfall that cascades from a high cliff. By then, we had become adept at pointing out interesting rock formations that looked like frogs, faces, or whatever.

Near the end is an area obviously added for drawing families with children to the tourist Mecca. Concrete dwarfs and gnomes guard the trail and a dark cave that eventually ends in Mother Goose land with fairytale figures for the amusement of the kiddies.

Okay, this is all pretty lame in these days of high tech theme parks, but everyone needs to go there at least once in a lifetime, if only to satisfy curiosity. Continuing on the stone trail, we eventually we wound up back where we had started and inside another strategically placed gift shop.

Due to the success of the barns – over 900 painted nationwide – a smaller version was created and became popular as a souvenir. The red birdhouse with black roof and white lettering is the current classic advertising scheme.

Naturally, I couldn’t pass by an opportunity to pick up a bit of Americana folk art for the backyard. Yes, I was taken for the price of a birdhouse, like thousands of others before me. You can check it out in my back yard, which now is yet another back and red billboard for commercial tourism.

Thank goodness, I don’t own a barn.

Have you ever heard of Rock City before?   Have you seen the birdhouses?

My stories are about daily life and the funny things that happen to all of us. My columns have been published in numerous newspapers, magazines, anthologies, and websites.
View all posts by Sheila Moss →
This entry was posted in Entertainment, Humor, Southern Humor and tagged Advertising slogans, Chattanooga, Lookout Mountain, Red Birdhouses, Roadside advertising, Roadside attractions, Rock City, Rock formations, See Seven States, Tennessee, Tourist attraction. Bookmark the permalink.