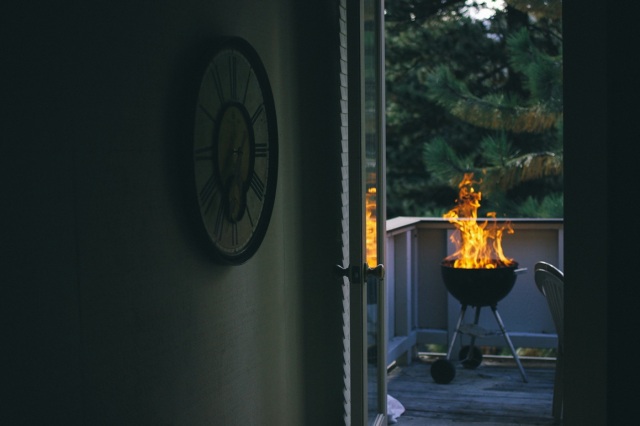 I hope you and dad are having a Happy Thanksgiving.  This year we decided to do something a bit different and fry our turkey whole.  I am in a newsgroup on the Internet that could not say enough about how great they taste fried.  I even got a recipe from one of the members.  It went something like this:

That didn’t sound too complicated, and even though I’ve had several kitchen disasters in the past, I thought this would be a festive way to celebrate Thanksgiving.  Besides, we could do the deed outside on our wooden deck to avoid making a big mess in the kitchen.  What could go wrong?

I couldn’t find a turkey with feet at the grocery store. The butcher thought I was crazy and suggested I try one of the nice frozen one that was on sale. I figured a meat man should know, so I got one. Have you ever tried to thaw out a frozen turkey? It’s a weeklong job. I figured the hot grease would do the trick anyhow, so why worry.

Have you priced peanut oil lately? I decided some of the other stuff would work just as good. After all, cooking oil is cooking oil. I managed to get the oil in the pot just fine.  Heating it was a bit tricky as it kept smoking and bubbling.But since we were outside, I thought the smoke wouldn’t hurt anything.

Now this is the part you won’t believe! I threw that sucker in the pot and when the thing thawed out, the oil boiled over on the wooden deck and caught the deck on fire.  We got the garden hose to put it out. Who would know not to put water on a grease fire?

It didn’t really matter anyhow. In all the excitement I forgot to watch the cooking thermometer and the grease must have become too hot. I was inside the house looking for the fire extinguisher when I heard the explosion. Have you ever seen a mushroom cloud?  It was incredible!

After the fire department left, we decided to eat dinner out next year. Not only was our Thanksgiving dinner ruined, but the deck burned down and took half the garage with it. The dog will be just fine when his fur grows back. We’ve always wanted a Hairless Chihuahua anyhow.

The fire department told us they make a lot of house calls about this time of the year from people frying turkeys who don’t know what they are doing. Like, is it my fault that the grease was cheap and the stupid turkey wouldn’t thaw out? They need to put consumer-warning labels on turkeys.

Speaking of the turkey, we are still looking for it. I think it may have blown to bits as we’ve looked all over the neighborhood. If you see a turkey shaped cloud of ash circling the earth, that’s probably it.

By the way, you may see us on the evening news on TV. A lot of people thought it was a terrorist attack. I only hope we have not been reported to the FBI.

Anyhow, I just want to let you know that we are all fine. I don’t think the house will be fixed for a while since there is a lot of smoke damage. We are moving to a motel. Do you think we could come to your house for Christmas this year?

You were not planning on frying a turkey, were you?

My stories are about daily life and the funny things that happen to all of us. My columns have been published in numerous newspapers, magazines, anthologies, and websites.
View all posts by Sheila Moss →
This entry was posted in Food, Holidays, Humor and tagged Cooking a turkey, Fried turkey, Funny story, Funny Stuff, How to fry a turkey, Thanksgiving humor, Turkey humor, Turkey receipes, Viral story, Warning labels. Bookmark the permalink.

4 Responses to The Fried Turkey Tale