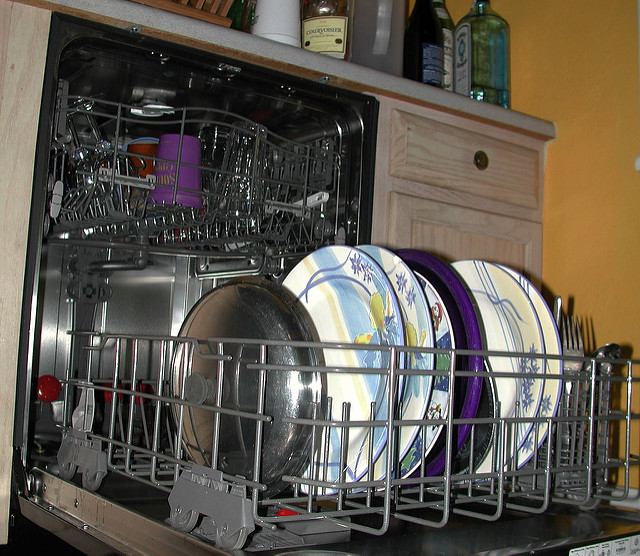 Well, it finally happened. My poor old dishwasher died in a poof of smoke. The last couple loads had an unusual smell. I optimistically attributed it to something plastic touching the heating coil. Funny, I never could find anything. I attempted to give it one last chance, but the old dishwasher rebelled. Smoke bellowing from the vent in the door made it apparent that it had seen its better days.

I briefly considered calling a repair service person. But water had been leaking out from under the door onto the floor for some time. The dishwasher and I had reached a compromise about the water ages ago. I put a dishtowel on the floor to catch the drips, and it continued to wash the dishes just as good as ever. Counting back the years until I ran out of fingers, I realized just how old this particular appliance was and wondered that it was still working at all. No wonder it was ready for Depends.

Time to visit the friendly local appliance store. But the store no longer sold appliances. Shows how long it’s been since I bought anything. Another appliance store, however, had gleaming rows of all sorts of items: refrigerators, stoves, and washing machines. It was an appliance jungle. The salesmen stood around like vultures waiting for raw meat. As soon as we entered the door, they descended.

“How can I help you?” asked a salesman with teeth even shiner than the appliances.

Err… I need a dishwasher,” I admitted, looking for the emergency exit in case I needed to make a fast escape.

“What kind?” he quizzed, naming off about a dozen brands.

Figuring my old one had lived far past its normal life expectancy, I opted just to get the same brand again.

“Those are down at the end,” he sneered, proceeding to show me the top of the line models instead. “These have stainless steel interiors, water at the top and bottom, and a dozen cycles.”

Those dishwashers had more buttons and gadgets than an airplane’s dashboard. I only wanted to wash and dry dishes. I figured with that sort of price tag, it should cook dinner, clear the table, put the clean dishes in the cabinet, and give me a neck massage.

“Oh, you mean biscuit,” he said with a pained expression, acting as if I had asked for avocado or purple.

“Black is the standard color. You can get white but it costs extra.”

White costs extra!? Gosh! It’s been a long time since I shopped for appliances, I thought. I really need to get out more.

I finally selected one of the lower end models, which came with few extra buttons – whether I needed them, or not. Why a dishwasher needs to do anything but wash and dry I never could figure out – just more gadgets to break down, I surmised.

With a flash of his gleaming teeth, the sales clerk entered the sale into the computer, gave me a delivery date, and whisked me and my checkbook out to the cashier. It was all over in a couple minutes. Boy, doesn’t take long to spend money, does it?

So, I am now the proud owner of a shiny new, black dishwasher. I think I will go push some buttons. Let’s see, where is the one for the neck massage?

My stories are about daily life and the funny things that happen to all of us. My columns have been published in numerous newspapers, magazines, anthologies, and websites.
View all posts by Sheila Moss →
This entry was posted in Humor, Shopping and tagged Appliances, Dishwasher, Hardware, Push buttons, Repair Service, Replacement, salesmen, Shopping, Store, Wash dishes. Bookmark the permalink.