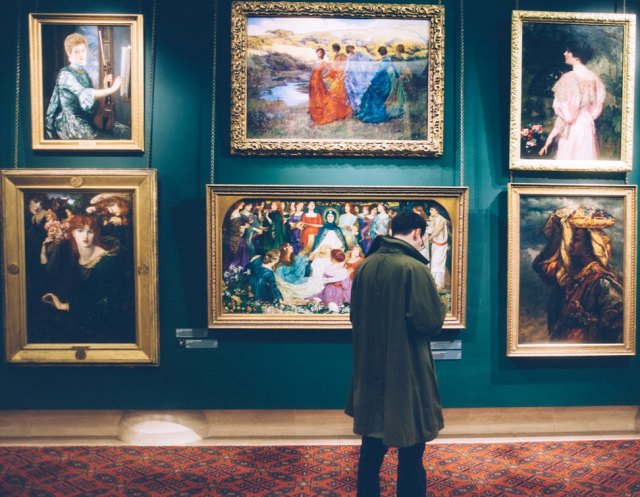 “Starving Artist Art Sale this weekend. Real oil paintings at bargain prices!” Okay, I’ll admit it. I was sucked in by a television commercial. Usually, I just ignore this stuff. I know the art isn’t really “art,” just cheap imitations.

Besides, all art snobs know you should buy art first and decorate around it — not buy a painting because it goes with your sofa.

But . . . I’ve really been thinking that I’d like to do something different in the living room. Ever since the great moving episode last summer, one wall has not looked right. I don’t have anything else to do, and it doesn’t cost anything just to look.

“Want to go to the Starving Artist show this weekend?” I asked my honey.

Actually, he likes art, so I didn’t have to twist his arm too hard to convince him.

Now, I’ve always heard that this type of art is mass-produced in China. Like everything else, the Chinese are able to make it faster and cheaper and flood the market with imitations.

They are actually real oil paintings, however, not prints. I suppose it depends on what you want, a genuine, imitation oil painting, or a copy of a better painting. Of course, the best ideal would be to have a good original painting. Unfortunately, real art is often priced out of the range of the average person.

So, I trudged off to the art show at a local motel. As I expected, it was difficult to find anything I liked. Most all of the paintings were of European scenes: mountains, oceans, waterfalls, things the artists had probably never laid eyes on.

In China, they hire anyone who can hold a paintbrush to mass-produce
paintings. An artist may paint as many as thirty pictures in one day. Sometimes several people work on the same painting, each specializing in what they paint best. Or an artist may paint several pictures of the same subject at the same time.

While pay is low according to our standards, apparently many Chinese are anxious to do this work. A shop may hire ten artists to produce originals, which are then copied by other artists. Or, they may make copies of old masterpieces. Many of the artists are very talented and even have degrees in fine art. But they think of the paintings as a commodity, not as a work of art.

Imitation paintings have been around a long time, of course. The art field is saturated with phony art, some of it good enough to fool even the experts. When fraud is exposed, a painting falls in great disfavor, not because it is not still just as good as ever, but because it is not what it was represented to be, i.e. it’s the painter, not the painting that matters.

The Chinese do not think of art as something beautiful to be produced one time. They think of it as a beautiful thing being produced over and over, as in nature. Most of the paintings are sold to commercial buyers, such as hotels and restaurants, who buy art on a large-scale basis. They are also popular with Florida condominium decorators who want pictures that match their decorating scheme and have little concern about art appreciation.

The European themes did not appeal to me. I wanted something more rural and rustic. Then I spotted it! After digging and looking through everything there several times, I saw a framed picture across the room against a wall. It was the only picture like it, old barns, a fence and a wagon. I studied it closer and liked it even more, so I bought it.

And, did I mention that it matches the sofa perfectly?

My stories are about daily life and the funny things that happen to all of us. My columns have been published in numerous newspapers, magazines, anthologies, and websites.
View all posts by Sheila Moss →
This entry was posted in Crafts/Hobbies, Humor and tagged art, Art prints, Art shows, Artists, Commercial art buyers, Imitation art, Mass-produced art, Oil paintings. Bookmark the permalink.