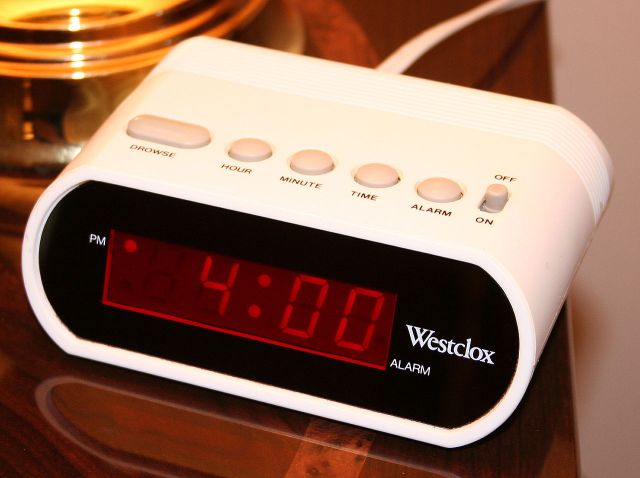 My alarm clock hates me! It has an evil plan to do me in. Like most people, I do not like waking up in the morning. But if I must be awakened, let it be by music. So, I bought a clock radio. It was cute, white and feminine, with a built in nightlight and many cute buttons for me to push.

It worked fine for a while, but at about the same time the warranty ended, it began to push MY buttons. First, the radio function died and turned into screeching static. Well, I thought, at least the alarm function still works. Yes, it worked, beeping at the top of its voice every morning – beeping loudly, just like a trash truck backing up. Now, I wake up every morning to the music of a garbage truck backing over me.

As if the beeping alone is not enough, the night-light comes on when the alarm goes off. It flashes like a neon sign, as the beeping truck sound becomes louder and louder. It practically jumps up and down on the night table screaming at me to wake up. How I hate that clock!

In another diabolical twist, the little red PM light and the little red alarm light are one and the same, making it remarkably easy to set the alarm time wrong by 12 hours. And I thought all those buttons were so cute! Somehow, I just know that it is part of the evil plan and the clock enjoys it when I set the alarm wrong and oversleep.

The demon-possessed clock must go. One of these days I will snatch it up, beeping, blinking and spouting static like a disco club. Laughing hysterically, I will throw it in the trash can, smashing it to smithereens. That is my secret plan. But first, I must have a new alarm clock, maybe one with dual alarms, big numbers, and NO nightlight. One that has never heard of garbage trucks!

But it’s too late to go shopping now. Could someone give me a wakeup call? It will be bedtime soon, and the demon clock is waiting.

My stories are about daily life and the funny things that happen to all of us. My columns have been published in numerous newspapers, magazines, anthologies, and websites.
View all posts by Sheila Moss →
This entry was posted in Humor, Technology and tagged alarm clock, Clock malfunction, Clock radio, clocks, mornings, Noise, Radio, sleep, snooze alarm, time, Wake-up call. Bookmark the permalink.